Over the last month, Chengdu has ignited with soccer fever like the rest of the world, evidenced by the hollering of football fans echoing into the night streets. Finding the right place to watch World Cup at 2:30am wasn’t too much of a challenge, however, as bars around the city stayed open all night (literally, almost until sunrise) to host football fans anxious to see which European team would take the World Cup home with them.

If turning up at a bar at 2:30 in the morning feels a bit strange to you (like it did to me for the non-essential games), one of the best place I’ve found to watch big sporting events are one of the dozens of spas dotted around Chengdu. Especially for the late night games, they provide a comfortable atmosphere with a low price and great perks.

If you aren’t interested in sports, it doesn’t matter too much: Chengdu’s spas are still a great place to join the locals and chill out.

Going to the Spa at 2am in Chengdu

This most recent spa excursion was pre-meditated: it was to watch a highly anticipated sporting event. And while it’s a great place to watch late night games, it’s a place I visit a few times a year even without such an excuse. It’s a noble pursuit of the relaxed ideals that characterize Chengdu.

It might strike you as odd, but this isn’t the first time I’ve watched a World Cup game while getting my feet rubbed at a spa. I watched the Lakers defend their national title from the Boston Celtics in the NBA Finals a month ago at a spa as well to similar effect (joined by Sascha). For those who aren’t familiar with the process, here’s what a late night trip to the spa will entail for you. 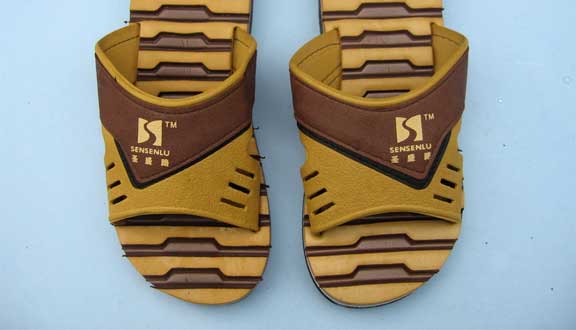 Change into slippers and get your key

When you arrive, the first thing you’ll do is exchange your shoes for a pair of slippers and take receipt of a numbered elastic wristband with an inconspicuous magnetic key attached. It opens the locker where you’ll keep your clothes after you’ve changed into the standard-issue Chinese spa pajamas.

Don the pajamas, choose your fate

Everyone in the spa is encouraged (forced?) to change out of their street clothes and into elastic-waist pajamas which will pair with your slippers to create the image of total relaxation. They’re almost always yellow and include a floral print pattern, too.

Once you’re wearing the proper attire – which almost never fit Westerners properly, by the way – the (massage) world is your oyster. You can play ping pong or snooker, surf the web while drinking tea at one of the internet connected computers, get a foot or full body massage or head straight to the spa.

Ordinarily the spa is the first stop so we’ll start there.

Move onto the spa

After you’ve moved onto gender-appropriate locker room, you strip off your clothes and head into the communal spa which is populated by slow moving middle-aged Chinese men looking about lazily. The routine is to come alone or with friends after a hard day of work and relax in the hot water. If you can handle it, you can alternate between the hot and cold pools which range from scaldingly hot to ice cold. It’s good for your skin.

Many spas also include pools with little fish swimming around that nibble away the dead skin from your body. Usually this costs an additional small fee (about 10 yuan) which they’ll bill you for when you leave, but it’s worth giving it a shot if you haven’t experienced this sensation before. In this kind of pool the water is luke warm and while the sensation is difficult to describe, most liken it to being tickled all over. Seeing someone experience this for the first time is always fun. It involves a lot of giggling.

While you’re in the spa area, you can watch TV on one of the large floor-standing projection TV’s from the 1990’s showing sporting events. During World Cup they show sports news and highlights (like Chinese ESPN) which you can watch from the convenience of a 5-person jaccuzi. Luxury living, baby.

Get a foot or body massage after you’ve cleaned off

After you’ve exited the spa and taken a shower (they insist!), don’t even think about changing back into your clothes. It’s back into the pajamas and up to the next floor which have a host of options available: majiang, ping pong, snooker and internet connected computers to name a few, but those are side attractions next to getting a foot or body massage.

Choose from traditional Chinese or Thai massages in either a private room or a public area which accomodates up to eighty people getting massaged at once, with a personal television to watch news, soap operas or in this case, the World Cup. We opted for a two person room (which is very common) that has nothing but two large reclining chairs with a TV directly in front of them. 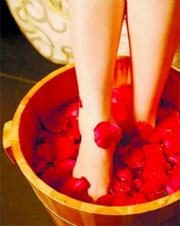 Sip tea, much on snacks and watch TV as you get your feet thoroughly cleaned and rubbed down. This is standard stuff to Chengdu locals. It helps if you come with something in mind to watch (like a sporting event) since the TV options in China are pretty depressing. If you’re lucky you can study Chinese with Dashan on CCTV but usually it’s down to news, infomercials, Qing Dynasty soap operas and rerun’s of 1986’s Journey to the West.

Location: ????5??11? Nijia Qiao Road, just off of Renmin Nanlu. This spa is in the south center of the city on a major road and is easy to find.

12 thoughts on “Watching the World Cup at the Local Spa”