When you’ve been living in China for a few years, you take things for granted. Like the innumerable bizarre items that you pass in the supermarket that you can’t identify, but don’t really think about.

To try something new and broaden my horizons, I stepped into a supermarket with Chinese friend (Huyi, pronounced “Who-E”) and came out with 6 things I had never tasted before. I grabbed a few of the things I had passed dozens of times — shaken my head in bewilderment each time — and decided to investigate thoroughly. Without further ado: 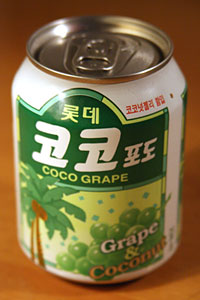 The first thing that struck me about Coco Grape was the size of the can. Its diminutive size made it stand apart from others on the the pseudo-fruit drink shelf. There were many colorful cans on the shelf and at first I hesitated with my hand hovering above strawberry-something juice before I decided to go with Coco Grape.

After opening the can and taking a sip, it turned out to be half liquid, half solid: grape juice with coconuts chunks floating around in it. It’s not bad. The sweetness of the coconut stands in stark contrast to the slightly sour grape juice. Neither I nor Huyi can read the label because it’s written in Korean, so we can only guess if the grape juice is really grape juice. “Grape & Coconut” printed on the front of the can pretty much sums it up, though. The chunks are a bit disorienting for me, but this isn’t the first time I’ve enjoyed a fruit-chunked beverage and Coco Grape sounds cool.

Huyi says “The can is tiny and it’s expensive. This is definitely a luxury item.” 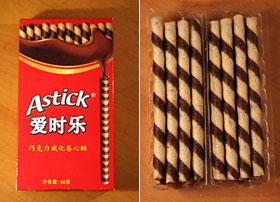 This item struck me from the impulse aisle near the cash register because it’s bold, bright red, and contains English. Also, it’s named “Astick” and shows chocolate being poured into what looks like a straw. I couldn’t help but imagine that it’s a Chinglish-bearing Pocky (Japanese snack) ripoff, but actually it’s imported from Indonesia and the taste is different. The outside is crispy and the inside of “Astick” is filled with creamy chocolate. Pretty damn tasty.

Huyi says “I don’t believe it’s from Indonesia. This must be Chinese”

The packaging for the Dried Beef Bag is a curious denim pouch that’s sealed shut — unique among the various other hanging beef snacks. On the outside it says “I’m natural, you are happy” (???????) and includes a tag which indicates that it’s the most delicious dried beef you’ve ever had.

We ceremoniously open the mysterious pouch to find a clear plastic bag within it that holds about ten of these small beef snacks, all individually wrapped. The actual meat is very small, slightly sweet, and soft. As I’m trying to figure out what occasion would warrant the purchase of a dried beef pouch, Huyi points out that a mutual friend used to carry this exact pouch around as an ironic wallet.

Huyi says “It looks like a pouch given to an adventurer before he embarks on a journey.” He shrugs and adds “But it doesn’t taste as magnificent.”

I found this in the bulk candy section amidst a host of other love-themed candies. The character imprinted on the front of the wrapped is Xi, a Tang Dynasty tradition that symbolizes happiness and prosperity, usually in conjunction with a marriage. If you look closely, you can see that the character includes a pair of hearts in the design.

When I reluctantly took a small bite, Huyi sternly said “You must eat it all at once. All at once.”

Slightly larger than a Mentos, the outside of Double Happiness is powdered sugar and the inside is creamy filling that comes in strawberry and lemon. These two flavors strike me as similar to Jolly Ranchers – pretty delicious.

Huyi says “I feel weird. This is love candy.” 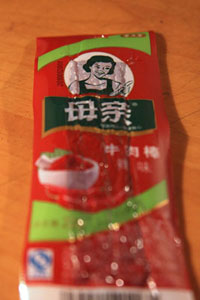 With “Mother” (??) and the image of a 1950’s US housewife on the front of the packaging, this must appear to Chinese people to be what we (foreigners) have been eating since we were children. And actually, aside from including Sichuan spices, this doesn’t taste too dissimilar from beef jerky I’ve had overseas. Basically, it is beef jerky, although here it’s called a beef stick (???).

The strip of meat is small and when our eyes meat as we’re chewing furiously, I can sense that this is unfamiliar for Huyi. Of all the items on this list, this is the least alien to me.

The tagline for this product, below Mother, says “Mother Uses Heart” (????)

Huyi says “How do we divide this?” before fetching a meat cleaver. After eating: “It’s too chewy. My mouth hurts.”

Ahh, Fragrant Barbeque Fish Strips. At first glance I couldn’t even tell what this was. With it’s long and thin shape it looked like a package of spaghetti transformed into a snack, but as soon as you open the package you can be sure that yes, it’s definitely fish.

This one actually included some English on the front: “Japanese Soy Sauce Flavor”, and “High Protein, Low Fat”.

The strips of fish are cut very thin and are heavily seasoned, like a rubbery string that tastes like like fishy soy sauce. Unless you fold it and put it on your mouth (weirdo), it hangs out of your mouth by about eight inches, making you look like a cowboy chewing on hay.

Huyi says “This is delicious. You should give me the rest of this.”

How weird do these seem to you? If you’ve had the pleasure of trying these or other weird snacks, let us know!

14 thoughts on “6 Weird Snacks from a Chinese Supermarket”