Note: This post is the fifth in a series chronicling the adventures of an American having a child in China. If you haven’t been following, you can start at the beginning of the series here.

The institutional coldness of the hospital soon gives way to the cozy quilt of Grammas wisdom and traditional Pig’s Feet and Peanut soup. For a full month after giving birth, Chinese medical theory calls for a strict regime to help mothers regain their strength. The regime is watched over closely by the older generation, replacing the nurses in white that rule in the hospitals.

The past three articles dealt with the institutional elements of giving birth in China and some of the hardships that come with being in a Chinese hospital. This time, I’ll talk about some of the traditional methods of dealing with postpartum recovery that have survived for centuries and, having seen how the traditions get passed down through the family, will probably be around for another century or two.

Postpartum recovery in China falls under one term: “sitting for a month” (???), which keeps the mama well-fed, protected and healthy for a full month after birth. According to Chinese medical beliefs, all illnesses come about due to an imbalance in the yin and yang within a person. The imbalances can result from excess elements — such as heat or cold — in the food or in an imbalance in the environment (air conditioners, for example) or a variety of other things. For a mama, the imbalance result from a nine-month pregnancy in which the yang (hot, male, active) element was strong: a woman is a power-house during this time because she is feeding another life. After birth, the umbilical cord is cut and the balance shifts to one of the yin (cold, female, passive) element in dominance. A mama has lost a lot of blood, all her amniotic fluids, and is exhausted from pain. She needs to be re-yang-ified.

A strict diet is the major re-yang-ifying factor. A woman needs to eat “hot” foods such as meats and eggs. And she needs to eat a lot. The idea is to fatten up a woman and replace all that she lost in the previous 10 months to the baby and to the birth. She needs to drink as much soup as she can handle and the soups should be appropriately full of protein-rich foods and devoid of hot spices. My father-in-law makes a mean Pig’s Feet and Peanuts Soup that really does the trick. Not only do the peanuts and pork provide the protein a woman needs to re-plenish her blood supply, but the combination is also great for promoting breastmilk — according to tradition. Another good soup is crucian carp soup, with or without tofu — high in protein and also good for breastmilk. 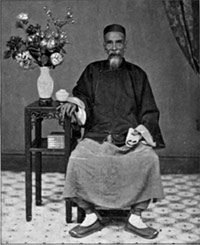 There are rules to help maintain the yang ingested through the traditional diet. A woman should not leave the house and never be without a hat. Leaving the house and not wearing a hat puts one at risk of meeting a strong, cool headwind and this is the greatest fear of all grandmothers. The old women hold the avoidance of any cold winds or cold water as one of the highest priorities.

Other practices include not washing one’s hair or taking a shower.  The ancient Chinese believed that giving birth loosened one’s skin and that by taking a shower, cold air is allowed in through the stretched pores, which can lead to colds, aches and future health issues. Xiao Bai confirms that the cold post-shower air has a prickly feel to it that is specific to these times in her life. There are numerous horror tales on Chengdumama.net about modern women who ignored the pleas and scoldings of their own mothers and went out into the world confident that superstitions were just that.

One of them posted a tragic note a week later, urging all women to adhere to the old women’s advice and stay away from the cold. According to her post, she met a cold wind stepping out of a taxi and immediately felt the wind swirl around inside her skull. She came down with a head cold, ear ache and one side of her face went numb. She needed months to recover. A Chinese blogger recently went through some of the superstitions surrounding postpartum recovery, giving birth and the spirits that lie in wait to snatch newborns and/or breastmilk from unsuspecting (and unprotected) mamas.

There have been several studies conducted in rural and urban areas in China on the benefits, drawbacks and practices of the “sit for a month” tradition. In Fujian, researchers organized the beliefs into three broad categories: Diet, Hygiene and Behavior. According to their findings, the dietary practices make sense and are beneficial. Some of the hygiene ideas, such as not brushing one’s teeth, might actually be related to water-borne illnesses. This problem might have been more serious in the past, yet the cautionary tales kept their strength even after brushing your teeth became less dangerous over time. Generally, the traditions have the best in mind for the mama and are meant to promote a healthy and speedy recovery and to avoid anything that might impede that. Studies like this one done in Hubei make a clear distinction between urban and rural areas and find that many of the inexplicable practices, like avoiding fruit, staying in bed for days and not brushing one’s teeth are more prevalent in the countryside, where modern education is generally lacking and traditional values hold sway.

Nevertheless, modern studies cannot fully repudiate an old woman’s demand that her daughter not brush her teeth and when the doctors and researchers leave, the old woman reigns supreme. In this excellent article for the Taiwan Review, the rapid rise in postpartum care centers to replace the village headwife is evidence of a growing appreciation for the old traditions. Some women in Taiwan evidently believe that the lack of such a postpartum culture in other countries contributes to sickness, aging and physical deterioration in foreign women.

Besides health, there are other issues surrounding the practice as well. Feminists argue that confining women for a month convinces them of their weaker nature and re-inforces patriarchal beliefs. Some women see it as a deep bonding experience between the mother and the child and the mother and grandmother.

For us, it is part of the deal and makes perfect sense. Xiao Bai is eating well — she still thinks she could eat more actually and we’ll see what we can do about that — and we are keeping mama wrapped up in the home and covered with a hat. Of course, living in 2010 and being a foreigner myself, we add a little bit of our own mix into the soup. We take walks, visit friends, she takes showers and drinks water instead of distilled rice wine. The key is that mama gets to be taken care of and gets her strength back, while still being able to breastfeed the little man and enjoy a bit of her own life. Sitting for a month is also a good thing for a man to go through, because it teaches you humility in the face of a woman’s suffering and also teaches you how to best alleviate it, through diet, behavior and just plain old TLC.

Tell us what you think about the Chinese practice and whether or not you and your family have any special/secret methods to help a mama get back on her feet.