Chengdu recently unveiled the details of a pilot program that will unify the household registration (hukou) system, effectively abolishing the differences between urban and rural hukou.

The hukou system has become a major source of social tension in the last thirty years as rural residents have watched their urban cousins grow wealthy while they languished in poverty – major inequalities exist between rural households and urban households in terms of the benefits, subsidies, insurance and aid they receive from the state.

The program here in Chengdu is a one-of-a-kind experiment in China to see what effects the unshackling of the populace through elimination of one’s hukou as the basis for receiving government benefits could have on poverty alleviation and social stability.

If the last 30 years are any indication of what happens when Chinese are released from bondage, then the impact of these reforms could be singularly transformative.

For a Chinese family, their hukou defines not only where they are from, but what class they belong to, what opportunities are open to them and how far they might be able to climb in the future.

For rural migrants – the oil that has kept the Chinese economic engine greased – the hukou is like an iron collar and a great wall wrapped into one woeful burden. In order to do anything in China, you have to produce your hukou.

If you have a rural hukou, but you are trying to get married, have children, apply for insurance, get a job, or send your kids to school in the city, it could be much more difficult for you. You might have to pay higher fees, you might not have access to that service at all and you might have to make runs back to the location of your hukou to gain approval, documents or signatures that still might not help you get what you need.

Rural officials are often much poorer (and therefore more corrupt) than their urban counterparts, so the benefits (unemployment, stats-subsidized insurance, housing allowances) are usually inadequate for anyone living in the city if they even exist at all.

If you have heard the term “floating population” before and were not exactly sure what that meant, now you know: 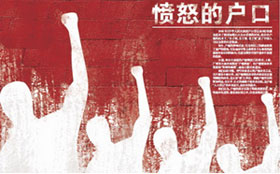 Rural workers who left their hometown for work in the cities were technically non-persons, unable to go to school, sign contracts, rent a home, go to the hospital or any other basic service, because according to the hukou system as it was originally envisioned, a person lived, worked, played, was cared for and eventually died within spitting distance of where they registered their hukou.

The system is the quintessential tool of control in China and even though it has been de facto ignored as long as peasants kept sweeping streets or assembling keyboards, the inequality remained.

The whole nation is watching closely to see what happens over the next few years as Chengdu takes off the iron collar and breaks down the wall that kept farmers and urbanites separated for so long.

When the Chengdu government announced their plans to unify the hukou system by 2012, they released a document, “The Unification of all Greater Municipality Hukou (Chinese),” which is a detailed account of the problems they encountered with the system and the solutions they are planning to enact.

Basically, the government studies show that rural residents have little access to government aid while urban residents enjoyed much greater access and also much greater benefits. In order to meet the demands of the “Enrich the Countryside” campaign and further the goals of the “Unifying Urban and Rural” program as well as contribute to the creation of a “Harmonious Society,” the city had to do something about all those broke, hungry and increasingly angry farmers out there with their noses pressed against the glass of the rapidly growing urban areas.

Some of the inequalities the government hopes to straighten out include the differences between medical insurance, housing benefits, unemployment benefits and education.

In the past, a farmer had a plot of land of a certain size and that was that, no matter how many children he had or how many people were in his family. Under this system, a farmer’s son would grow up without land of his own and automatically enter the ranks of the un-(or under-) employed, but with no system in place to protect him or help him find work. According to the city’s plan, by the end of 2011, urban and rural unemployment benefits will be unified and a landless farmer will be considered unemployed, thereby giving him access to urban unemployment benefits.

These employment benefits also cover discharged soldiers. Soldiers who returned to their homes in the city could expect unemployment benefits and help finding a job, but soldiers returning to a rural home were met with the same lack of help that every other farmer suffered under until these recent reforms. Under the new rules, a discharged soldier receives help no matter where he is from, unless he has land – land under the Chinese system is the equivalent of a job.

Farmers also had no access to government subsidies that helped urban dwellers rent or buy homes, under the new system they can apply for these benefits with their ID card, instead of their old hukou.

A Final Step Toward Total Urbanization

That the government would be abolishing the hukou system purely to correct inequality seems hard to swallow in today’s China. The move will also speed up urbanization, a major goal of the nation since 1979, and this is perhaps the most important consquence of hukou reform, from the government’s point of view.

If farmers flock to the cities en masse and alter their hukou status from rural to urban, that theoretically leaves the countryside open for development. Development of the countryside has been a very difficult thing to pull off, despite “Enriching the Countryside” and “Urban and Rural One Entity” campaigns, because China’s developers and local officials routinely collude to drive farmers off of their land with the least possible compensation. In order to speed up urbanization and remove the obstacle of angry farmers, local governments across China hope that eliminating the differences between rural and urban hukous will act as an attractive enough carrot to lure farmers away from their land.

But as officials in Chongqing have learned, Chinese farmers are “once bitten, twice shy”. Hukou reform in Chongqing has stalled as thousands of farmers have refused to alter their hukou status out of fear of losing their land for the smoke and mirror benefits of being a bona fide urbanite. Rural residents would rather hold on to their land and fight it out with developers (or simply plant food), than risk giving it all up, so the city has switched gears and focused on “turning” rural students into urbanites instead …

Even if the government’s plan works and farmers throw their rural hukou (and land) away and move to the city, the impact might be less than desirable. Online critics of the plan point out that under the new system, rural schools will stand empty as rural parents make a mad rush for urban schools. Another major concern of netizens who reacted to the story is the clause that allows “outsiders to apply for a Chengdu hukou,” a clause that has many worried that benefits will be stretched thin by an influx of non-Chengdunese.

Chengdu officials make a point of saying that under the new system, all distinctions between urban and rural hukou are abolished, which means urbanites can also move to the countryside and buy land, farm and in effect “trade classes”. Instead of inspiring urbanites to consider life on the farm, statements like these only fuel farmers’ concerns that the whole hukou reform thing is just another land grab.

Hukou reform has been on the agenda for years.

In 2007, a China Daily article remarked that the hukou “has become neither scientific nor rational given the irresistible trend of migration” and just a few months ago, Professor Kam Wing Chan of the University of Washington wrote a post for the East Asia Forum that gathered a lot of the snippets about hukou reform from around the Chinese media, including a joint appeal for serious reform from several provinces.

And in this response to Chengdu’s pilot program, the authors argue that the hukou has actually contributed more to inequality, poverty and suffering than anything else, stating: “The best hukou system is no hukou system.” There is even an English-language blog, Hukou Reform, that tracks the progress China has made thus far in abolishing this arcane system of control.

Without the hukou, people will be able to move freely and shed their previous class distinction and assume another based on their own desires. In the West, we take this freedom for granted, but in China moving to another city has always been a huge deal because all of the basic social services that ensured a retirement in relative peace and quiet were based on one’s hukou. Mobility — legal mobility — does not only present many economic opportunties but also social issues as well:

As mentioned above, many city dwellers who have voiced their opinions online fear an even greater influx of farmers which means a greater strain on traffic, housing, government services, education etc. Will there be a measurable move out to the countryside? Will people pack up and move en masse to the city? Or will people basically stay as they are and just apply for the new benefits? Can farmers even afford to buy in to the urban insurance options? Will this only affect those farmers who have already left the land behind and can now officially become the urban resident they were  “pretending” to be since they came here years ago to work?

Although it is clear that the hukou system as a tool of social control is obsolete, the impact of “hukou re-unification” is much more difficult to discern. The problems lie not just in the system, but in China’s underdeveloped insurance industry, irrevocably corrupted lower levels of government and the deep class divisions that permeate the society.

Perhaps Chengdu’s pilot program is a step toward social reconciliation, itself the first step toward a measure of equality in any society.

This post was authored by Sascha, an American writer living in Shanghai who’s lived in Chengdu for 10 years.

28 thoughts on “Chengdu’s Pilot Program to Abolish the Hukou”