I first talked with Ron, Chi Chi and Bianca in the stairwell of the Poly Center, outside of the Sinostage Dance Studio where the three of them worked as dance instructors. About two minutes into the conversation, I asked them about Chengdu, in the sheepish way you’d ask someone about a dish you made that you know you’d oversalted. Ron’s shot me a eyes-wide glance and cocked his head like only a black man can, and shouted out, “Chengdu is the Shit!’

Chi Chi and Bianca nodded sagely. I looked at my casserole in a whole new way. The Shit? Really? I pressed on, what do you mean by this “the Shit” statement? Please elaborate, because when you’ve lived here so long like me, you overlook the good things and get lost in the daily grind. You get them blues, and start stomping about. Or retreat to a compound and only venture out once a month to say hi. Or move, right?

“There’s an energy here,” Ron explained to me gently. “This place is bumping and you can feel it.” Bianca and Chi Chi chimed in, “There’s so much going here” and “This is definitely the vibe of a city that’s coming up.”

This from dancers who live, work and play in the streets of Seattle and LA. I found it hard to believe. But afterwards I walked around, sniffing up the old Yulin alleys. I stopped and took a good look at the glassy high rises on Tianfu Dadao. I actually clicked on and read my “Chengdu” Google Alerts. I counted Bentleys and Rolls Royces.

I got off the 815A, a rickety peasant bus that ferries workers to the South Railway station from Huayang and back, and looked up at the Wal-Mart across from my compound. Almost finished. They also finally broke ground on the hole behind the Wal-Mart, and both of the major roads leading there just got repaved.

But paved roads and a Wal-Mart do not mean Chengdu is “the Shit” – getting that title added to your town requires a lot more. A great club scene perhaps? Street art that people from non-the Shit towns come and marvel at, take selfies in front of? A couple companies that aren’t evil but still do awesome work? Diversity? Is diversity a prerequisite for being the Shit? I think it is.

So maybe Chengdu isn’t world class but it’s not the first time I’ve heard people say nice things about the city I live in. One person put it to me this way:

“Why would you move your whole family to send your kids to an American school? You went to American schools, you know what they’re like. The kids that come out of Chinese schools, what’s the worst disciplinary problem you’re going to have with them? Smoking? Any thing could happen to an American kid at school. But here in China the kids learn to study hard, they behave, they take school seriously. Do you see any gang fights, bums, stuff like that out here? Don’t you feel safe? I would think hard before you choose the US … “

See we were talking about my Big Plan to establish a presence on three continents, specifically Phase 2: Get my two kids to America. After that … well I can’t tell you too much about it because

The Philosophy of the Big Plan

I can offer my children up three worlds: Europe, the US and China, because I am from two of them and lived for a long time in the third. Having my kids spend the first few years in China was actually the wise choice in many ways.

The primary way that living here turned out to be wise was cost. In the US or Europe, I would not have had the time I had with my boys these past four years because I would have been away from the house working. Here, I managed to put together a pretty decent living situation and spend a ton of time with them. Low cost of living had a lot to do with it.

But now the boys need schoolin’ and although I feel the person who commented above, I also feel that the US and Europe have the best education systems right now, especially when compared with China. Japan and South Korea and Singapore are great I hear, but when it comes to this Big Plan, feasibility is the trump. To wit, my plan is to keep this compound I have in Chengdu and establish a beachhead in the US, while sending a team of spies into Germany. Sound feasible?

We’ve seen what happens when aggressive expansionists take on more than they can chew. Will the Big Plan result in colossal defeat? Or can I leave my boys three territories to choose from as they see fit?

Tell Me of the Sun

Let’s leave the details to the Devil for a moment, and first ask the question: why?

I make a point of asking everyone who has returned or recently arrived from the West what it’s like back there. Like a grubby malnourished prisoner accosting an inmate who had an hour out in the yard, “tell me of the sun!” because most of the time it feels like I am living on the periphery of the periphery, and there is no Foundation I am aware of slowly going through the motions of galactic conquest. It’s just us, out here, living cheap and being us. Ron says we’re coming up? I don’t have big papers coming here asking to interview me, “You’ve seen Chengdu rise up from the shit to become the Shit, tell us how it went down Sascha!” and until they do, I reserve my “the Shit” for cities that deserve it. 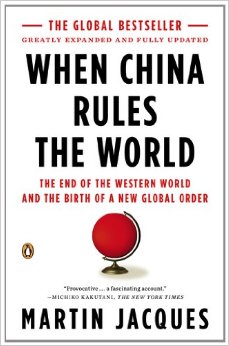 What I hear from those I interrogate isn’t that the sun shines down a bit warmer over there in the West, or that the streets are paved with gold. Oh no. I hear just the opposite. Life is tough. Work is scarce. The police are beating people up. Ignorance rules the land. I skimmed Martin Jacques’ book, When China Rules the World (which led to Troy Parfitt’s Why China Will never Rule the World), and as I left The Bookworm I peered up into the sky and saw the China Dream the Party wants us all to see: ultra modern cities gleaming in the sunlight, children laughing and playing, harmonious interactions as far as the eye could see, no derelict noodle stands anywhere and every laowai was getting a benevolent pat on the head.

Could it be true? Will China rule the world and spread their deep wisdom and culture all across us like smooth Skippy’s across a strippers ass? (Sorry). But it’s books like Jacques’ that makes me ask myself, why? Why make the jump to the US when I have a pretty easy life here in Chengdu? I spend most of my day thinking up stuff to write and hanging out with my kids. You think I’ll be doing that in the US or Germany?

Another friend of mine put it to me this way the other night:

“I’m never leaving Asia. Are you crazy? Over there [in the West] people get arrested for everything. Here, I could drive drunk and run into a lamp post and what would happen? Nothing. And beer is cheap. YO! Two more IPAs!”

That’s right. We were drinking IPAs at The Beer Nest and it’s not hard to imagine every bar in Chengdu serving up microbrews in a few short years. Every good thing the West has is eventually discovered and reverse engineered by the renascent Chinese. Should we view our status as fleas clinging to a mangy Chinese mutt’s balls as actually first dibs on the Shit?

Jacques says ten years, and China will have a bigger economy than the US. Twenty-five years and Americans will be begging the Chinese to let them in. Ok that’s not what he wrote, but basically, Jacques thinks the West is finished, and we better start reading up on what tribute we should offer to our new overlords.

I for one am hedging my bets. The answer to Why Try to Make It in the West for me is this: the West has so much to offer and it is my responsibility to expose my kids to as much of that as possible. I think it is very feasible to have three living spaces on three continents, even if you are a broke writer like me. It just takes ingenuity and harnessing all of the resources available to you. For me the rewards are worth every bit of the stress, and so I am moving on to Phase 2 of this Big Plan in the Fall. That does not mean I am leaving this city. Chengdu is the Shit, after all. No, the Big Plan calls for mobility between the three nodes.

So that’s why Phase 1 of the Big Plan was Building My Chengdu Compound, because that way, if I do find that the economic barriers to a beachhead in the US are too high for me, I can always retreat back to Chengdu, lick my wounds, tell my friends some lie about how “it sucks over there anyway” and just wait for China to rule the world.

28 thoughts on “Why I Can’t Leave Chengdu”