We at Chengdu Living are fans of fine food of the upscale and the home-style variety. So when we heard that an American barbecue restaurant was opening in Flower Town, equipped with an industrial-grade smoker, we couldn’t resist the invitation to sample their offerings. 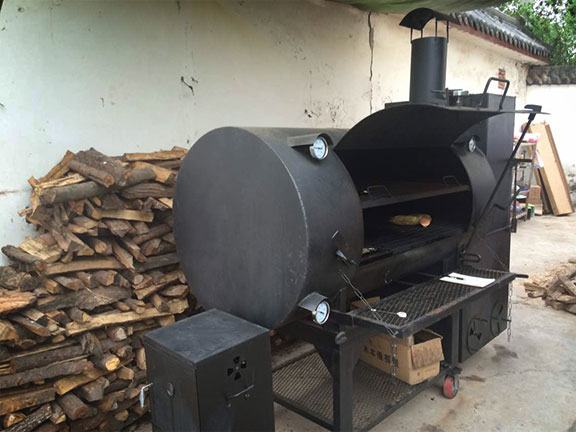 We Ubered out to the scenic location of the newly opened Iron Pig BBQ (right across from the Dojo house), and were treated to a spread of delicious dishes, from smoked ribs, pulled pork, brisket, and salmon to potato salad, cole slaw, ranch beans, cornbread muffins, and biscuits… not to mention 6 kinds of homemade BBQ sauce.

Our hosts were the founders of the establishment, Justin Barrow, and his partner Rex Liu, who sat down with us to answer some questions about the Iron Pig.

Chengdu Living: Where are you from, and how long have you been in Chengdu?

Justin Barrow: I am originally from Bloomington, Indiana, and I have been in Chengdu for 5 years, in China for 17 years.

CL: How did you get the idea to open this restaurant?

JB: I missed having a place to barbecue. That was the big motivator.

CL: Did you have a history with barbecue? Was barbecue something you ate a lot growing up?

JB: Yeah. My grandparents were from Kentucky, so that was part of growing up, I guess.

I used to barbecue. But the two things that really got me started here were, first, the frustration of trying to barbecue stuff on the back porch of my apartment, and wanting to have a place to relax and cook stuff. And second, seeing a place like Home Plate in Beijing that does authentic barbecue. That really inspired me as well.

CL: Did you make all of the food here today?

JB: We did, together with Lao Xue, who is our resident cook here, our pit master.

CL: How did you meet your pit master?

JB: It’s quite interesting; he used to own a Chinese barbecue place. And we recruited him to come over here. We started working with him a month or two ago, training him with American techniques… because it’s completely different from anything you have in Chinese barbecue.

CL: Was he intimidated by the cooker?

JB: He was a little skeptical at first, like ‘does it really work this way? The temperature is too low, shouldn’t you put more heat on it? Oh, it takes 8 hours.’ But now I think he is converted… because it really is a much better taste.

CL: Can you tell us how the smoker works?

JB: With barbecue there are two basic types. Direct, that is Chinese barbecue. Then you have indirect, which means that you have the fire – the heat source – that is separate from the meat. Either you are radiating some of the heat over, or you have the smoke that travels, and that is cooking the meat. It’s like having a big oven, but you also have the smoke that is moving through it, so that’s where you get the smoked flavor from.

JB: A mixture of both. I always look for new recipes, online and stuff. But a lot of the food we ate today is stuff we used to make when I was a kid. 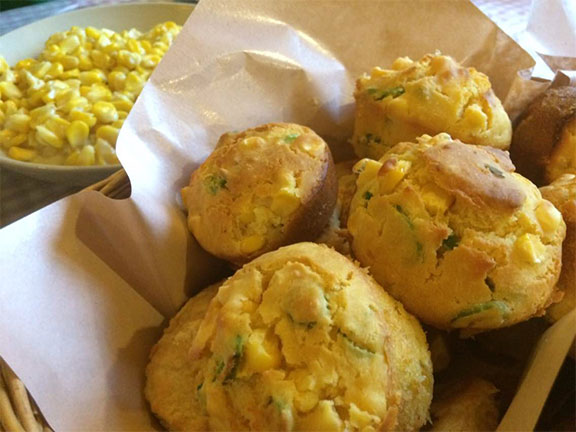 CL: Did you also make the sauces? What sauces do you have?

JB: We have the Texas – so a little spicy flavor. We’ve got Kansas City. We’ve got the Carolinas, so that’s a vinegar sauce. We’ve got a mustard sauce. There is an unlimited variety really. We are working on a Sichuan flavor sauce as well.

CL: The centerpiece of your restaurant is definitely the smoker, how did you get that magnificent piece of equipment?

JB: We made it ourselves. We took some design ideas from some smokers in the states. Fortunately Rex’s wife has a company with people who have AutoCAD software, so they helped us with the blueprints. And we also found someone from Rex’s hometown who makes cement mixers, and they were able to fabricate it for us. They are good welders, so it is good quality.

CL: How does the smoker work?

JB: It is a wood burning smoker. We burn mostly native oak. You have to use oak, or apple, or other fruit trees. We could probably barbecue 12 full slabs of ribs at once, or shoulder or beef… we could feed an army. 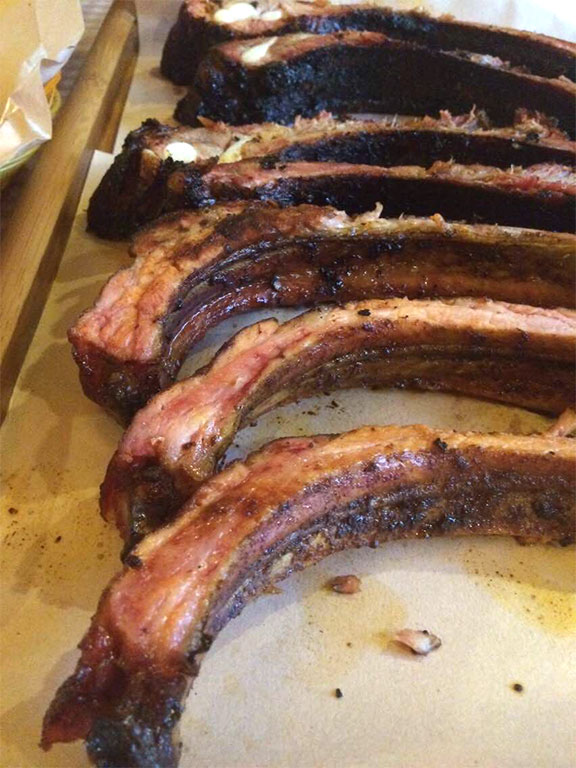 CL: What is your smoking technique?

JB: The beef takes a little longer. It takes about eight hours for the beef. But you have to start with the right cut of meat, and that is hard to find sometimes. Your ribs will take about five. Shoulder about six hours or so.

Today was the first time that we tried smoking salmon. Matthew [from Aquafude] helped us to brine it, so it has a little salty flavor in it. Then you just put it out to dry for a half hour or an hour. And we cooked it for about an hour.

CL: Where do you usually get your meat?

JB: We get our meat directly from the wholesale market, from the source. We know the butchers, and we know where the meat is coming from, so we can pay attention to the safety factor.

CL: What are your plans for the menu?

JB: The next priority is we want to get some good cocktails on there. Get the alcohol going again. We want to add some chicken as well. But the chicken is a little tricky. So we want to be more confident before we roll that out.

JB: I think it is the skin. I don’t like it when it’s dry. And that is the thing that we are trying to get – moist, succulent skin, as well as the flavor inside. I am working on a couple recipes. We also want to set up a grill, so that we can do hamburgers and steak.

CL: Before you put the cuts of meat out there, do you marinate your meat or baste it?

JB: Actually, it all comes from the rub. It’s a dry rub. It has 5 or 6 different spices in it. You rub it into the meat, and then you leave it overnight.

CL: What cut of meat does the pulled pork come from?

JB: In the states we call it Boston butt, or pig butt, but it’s not from the butt, it’s from the shoulder, right above the leg. And the beef brisket comes from the chest area. That is usually the hardest, toughest meat, so you have to cook it very carefully, low and slow.

CL: It must be challenging to have a restaurant where it takes a five-hour lead time to prepare a dish. Not to mention, you have a full time job. How do you have time to do that and open up the restaurant at the same time?

JB: It’s a lot of weekends and a lot of late nights. Just trying to find the time. If you love it, you make the time for it. It’s good food and I like that people can enjoy it. 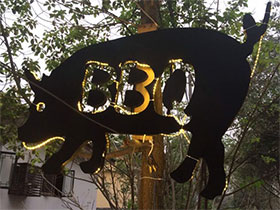 CL: How long has the idea for this restaurant been marinating in your head?

CL: Really? That seems really quick. You are men of action.

JB: Well, we built the thing (the smoker) and in late November we finished it. In December we were trying to figure out where to put it. We had a place we were looking out downtown. But the rent there is ten times as much as it is here, so we decided to put it here first.

CL: Are you thinking about opening a location in the city? Would you imagine doing it in two locations?

JB: I would love to have two locations. Some place that is still in the countryside, where you can be outside and not breathing the polluted air. And then also having a place downtown.

CL: The food is delicious. It seems like the challenge is expediting the delivery mechanism, so that people can satisfy their craving for it.

JB: That is one thing we have been thinking about a lot. Maybe it makes sense to open up a small place in Tongzilin, and we could cook the meat here, and truck it over there to do delivery. But on the other hand, when you come to a barbecue place, you want to see the pit, want to see people walking around. It is perfectly fine to have a place downtown, but you lose some of the environment.

Another thing is that in order to be able to cook more, you have to have enough business so that every day I’m cooking a couple slabs of ribs. If the demand is there, and I’m confident I can sell it, then I’m going to be cooking every day.

CL: Any model that allows you to produce a lot at one time sounds good. Either bringing people here for a specific event, or bringing the barbecue to the city to distribute it. You could consider doing delivery, or catering. I would love to be able to get barbecue take-out after work. Even if it was reheated, it would still be good.

JB: We could do something like set up a storefront and then we set up a schedule, like available on Fridays and Saturday. One thing that we didn’t do today, that we are interested in doing, is sandwiches. Pulled pork sandwiches, brisket sandwiches, with coleslaw on top.

CL: We’ve always thought that Flower Town was very cool. People are friendly. It’s not crowded. There is foliage everywhere. It would also be cool to do a weekend B&B out here, do you have any plans for that?

JB: Yes. We are in the process of cleaning up and redecorating the upstairs. Once we prepare the rooms, we will be opening them up for guests to stay in as well. We want to make full use of the open space and nice environment.

CL: Last question, when is your official opening? What are your operating hours?

JB: We’ve had a couple events, but we plan to have an official opening next weekend. We are going to be open at selected times for a while. If you want more information, you can check our official WeChat account.

Thanks a lot to Iron Pig for the fantastic food. Scan their QR code above to get all their information.

Update: Below is a map of the location of the Iron Pig, which is directly across the street from Dojo.

19 thoughts on “Behind Chengdu’s Best American Barbecue: The Iron Pig”