Two-wheeled locomotion has long been a hallmark of Chinese culture. Propaganda from the Cultural Revolution depicts pigtailed city girls in olive garb mounting bikes before heading out to liberate their brethren, while today vintage Flying Pigeon bicycles are now sought after by cycling connoisseurs worldwide.

We’ve all heard about the rise of the automobile in China – and our respiratory system and stress sensors are already well aware of the ramifications. You know this. But the bicycle is like the book: been there forever and not going anywhere, no matter what new gimmicks the world brings.

Chances are, if you’re reading this, you own a bicycle or have had at least several bikes stolen, and somewhere beneath your chiseled chest or firm bust lies a sturdy heart. Some beat faster than others, some deal with stress better than others, some have clogged arteries from too much twice-cooked pork, and others are clean as KFC bathrooms. It takes heart to brave the streets of China on a bike. If you’ve taken that step, then carve another notch on your hypothetical totem pole of life achievements. 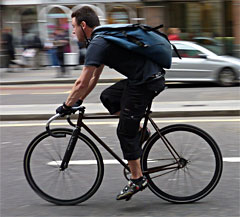 I remember when I first arrived in Chengdu on the eve of the Olympic’s closing ceremony, on what will forever be remembered as a “hot stinking night in Chengdu”. The sheer mass of humanity frightened and fascinated me. I took to the streets amid the horde of stinky dofu slayers, three-wheeled rickshaws, buzzing armies of e-bikes, and grannies pedaling slower than molasses uphill in winter.

Like a mountain biker on a steep descent I made a mental map of the obstacles in my way. Curb hop to avoid the parked scooter; swerve to avoid the kids in tracksuits chomping on hotdogs; track stand at the red light to shoot out before that cross-legged chain-smoking water deliveryman would block my path.

If you ride fast you will crash. It’s impossible to dodge that 3-wheeled trike as its driver pulls a u-turn taking up the entire bike lane. Or that e-bike who’s passenger probably had more oil in their lunch noodles than their brake pads have seen in their entire existence. Or that black Audi or bread car, which will turn right at the intersection even if the reincarnation of Mao Zedong himself was crossing the crosswalk.

You will crash. Or something will crash into you. But you can reduce the chances of injury, embarrassment, and arguing over hospital bills for fake victims. You must master the art of psykling.

Yes, psykling: this is the Kung Fu of the bicycle.

Masters of this art can stare down a Dongfeng dump truck on the lowliest of Benda road bikes; they can dash through four lanes of traffic at Tianfu Square without anyone belching a beep; they can dodge sea of shoppers at Yanshikou Market with highest heeled Sichuanese beauty in tow.

These are the guidelines: 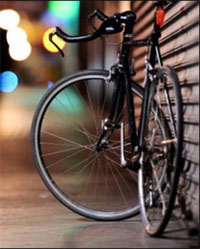 The first teaching in the art of psykling is mastering your confidence on the road. If you find a speeding e-bike coming at you against the flow of traffic, by no means should you waver or swerve. He will match your move with some kind of e-pyskling reverse logic and you will be on a crash course unless one of you slams on the brakes.

As a cyclist you feed on the mana of momentum – it’s something that cannot be wasted, you must be bold and stick to your path. If you keep at him, he will move away. Or if you are like me and prefer the “ranger” approach, always encounter e-bikes from the inside lane, this forces them to move to the outside lane and closer to traffic. Never put yourself at risk by swerving closer to traffic because someone is coming at you the wrong way. I had a friend spend 20 days in the orthopedics ward of Huaxi hospital for a broken wrist resulting from an encounter with a rogue driver.

Traffic is deadly, so seek distance wherever possible. I despise those short blue fences just as much as the other guy and have wacked a shin or two due to unruly pedestrians. However, I’m happy they are there because they ensure that there will be less cars in the bike lane. This isn’t Germany, so you can’t expect a car-free bike line so it’s best to take advantage of your natural defenses.

The same goes for sidewalks. For whatever reason, pedestrians in China have joined up with the International Occupy Movement, and are taking to the streets in four-person packs. Perhaps there are too many cars parked on the sidewalks, or they aren’t fond of walking on the “blind man tiles” with their sandaled feet. Whatever it may be, a throng of four pedestrians in the bike lane spells trouble. In this situation you have two options: seek the sidewalk or ring your bell like a maniac in hopes that one of them will recognize that they are obstructing the flow of bicycles. Yelling choice adjectives, regardless of language, also seems to be an effective method of clearing the way.

I too was once a skateboarder and understand that helmets degrade from one’s “cool-factor,” but like I said earlier, crashing is inevitable. Your memories and ideas are worth protecting, so put a lid on. You don’t want to be reduced to a vegetative state because some rickshaw or e-bike cut you off.

I’m baffled by the fact that Chinese parents aren’t covering their kids with protective pads or smog masks when they hit the streets, seeing that these are practically living 401k plans that must bear fiscal responsibility for their parents later in life. So it’s up to you, laowai, to lead by example. Helmets are hip. Get a funky color or cover them with Jah Bar or Disco Death stickers if you think they make you look square. If it’s cool, the locals will follow suit – as they seem to be doing with with fixed gear bikes – but that’s a totally different story entirely.

In addition to looking badass, the bandana has several advantages.

I recommend a Lycra/Capilene quick dry sporty bandana as it’s more breathable and will wick sweat and respiration droplets in winter and summer. 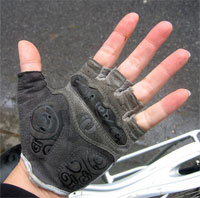 Pick up a pair of gloves and save your ulnar nerves. Most of you foreign folks will be riding bikes that are much too small. Personally I take pride in having the same crappy road bike since I was a student in 2008. A pride rooted in a stubborn “freegan” philosophy, which has prevented me from “buying” something more suitable. Moreover, if you are a fairly tall chic or dude you’ll have to pay premium prices for a bike from Decathalon or the Giant store that actually ‘fits’.

Such bikes are obviously targets of theft so make sure you take precautions (like these). Regardless of fit, a good set of gloves will save your nerves and save you the unpleasant experience of removing gravel from your palm with a sterilized sewing needle. When you crash, you will naturally use your hands to break the fall and scuffing up some old cowhide is much better than your fingers and wrists, especially if you are musician or rely on (monkeyism) for part of your sustenance

The final tip is to Keep Your Senses Aware.

I wish we all had spidey sense to dodge obstacles and stray loogies, but we don’t, so you’ll have to be vigilant. This means, don’t hit the street with tunes for the first couple weeks, and practice surveying your space and learning the patterns and rhythms of traffic. There is a bit of a method to the madness and with some practice you’ll be able to learn which lights you can run, what intersections are always delayed, how fast you need to pedal to overtake a bus etc. 2Pac said it right: “Ya got to keep your head up!”

For the past 13 months I have been making a 16+km commute to work in the north through the gauntlet of RenMin Nan Lu, Yanshikou and several one-way alleys. Additionally, I have made my fair share of cycling treks around southwestern China. Take it from me, psykling is a terrific way to get around Chengdu.

If you have any tips or guidelines that you’ve learned from cycling in or outside of China, I’d love to hear them in the comments below.

37 thoughts on “Psykling in Chengdu: A 5-Point Guide”