Promoters for real estate opening parties spend tens of thousands of RMB to set the stage for potential homeowners. Magicians and mini-skirt wearing violin players are commonplace, but none earn even close as much as the coveted Anglo-Saxon musician/clown. The “White Monkey,” as some call the foreign performer, is the ultimate showpiece for any Grand Opening, be it for a multi-billion RMB high-tech zone or an apartment villa in the cabbage-picking boondocks.

At that time I was a senior college student in a foreign study abroad program. Money was tight, I had an English teaching job in Wenjiang every Thursday (5 classes back to back) and two of the classes consisted of 45 screaming kindergarteners, who could barely speak Chinese let alone learn basic English words.

The gig was an anniversary party for the Great Wall Wine company at the InterContinental Hotel. If you could bottle wealth, I could have made a fortune from selling the air. The chandeliered lobby featured a seafood buffet and bottomless bottles of liquor served by scantily clad models. I remember not having a white collared shirt, so my agent provided a frilly disco-esque shirt and a pair of black leather shoes several sizes too small. 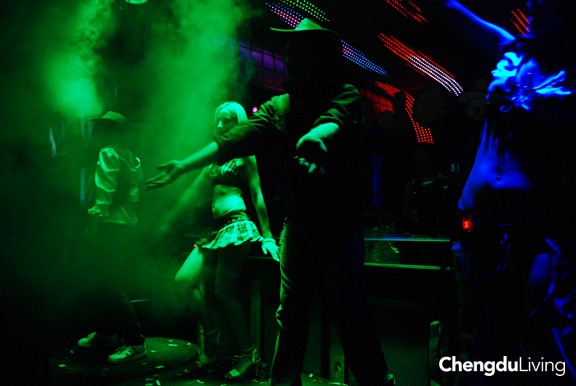 There were four musicians altogether:

None of us had ever practiced or rehearsed songs together. Naturally I was a bit nervous about embarking on such a half-assed endeavor in this classy venue.

“So we are playing Autumn Leaves, What a Wonderful World, a Paul Simon tune, all easy stuff.” The trumpet player instructed confidently.

“Oh, I played Autumn Leaves in college jazz combo, it’s like E minor, A minor, F# B7 etc.” I replied.

“Yeah well we have backing tracks so don’t worry too much.”

“You know an mp3 without words, it’s like a sing-along” He replied, smiling and pulling back his ponytail.

I watched the lobby fill with bespectacled, balding Chinese men accompanied by women 20 years their junior.

The gig itself was painless, within a few bars of each song I figured out the general chord pattern and plunked out a bassline, which was muted by the overpowering backing track. After each two song “set” the crowd applauded and soon we were approached by tall girls in qipaos (traditional Chinese skirts) asking,

Posing for photos, I felt like an instant celebrity in a pre-packaged Ren & Stimpy kind of way. If you wanted Rock-star-in-a–can this was the place for it. In this industry one’s musical skill is not determined by their chops but rather if your cable can reach the soundboard some 20 meters away from the stage.

Admittedly, the first couple “gigs” were exciting and new, but the novelty of the White Monkey Gig wears off quickly when one sees the sociological forces behind the whole fiasco.

Some people actually make a career out of this…

Historically speaking, entertainers in China are typically members of the lower class. I’m sure you’ve seen a movie or three in which an underprivileged street kid joins a traveling theater troupe either to rise through the ranks or to be dealt a cruel dish of reality. Same goes for modern day performers, many with high hopes get stuck in the net of mediocrity.

Dream of becoming a famous cellist or classical musician? I hope you look hot in a mini-skirt and can play a techno version of the can-can on the violin.

Dream of leading a R&B group or jazz band on saxophone? Sorry buddy, only Kenny G covers are allowed. 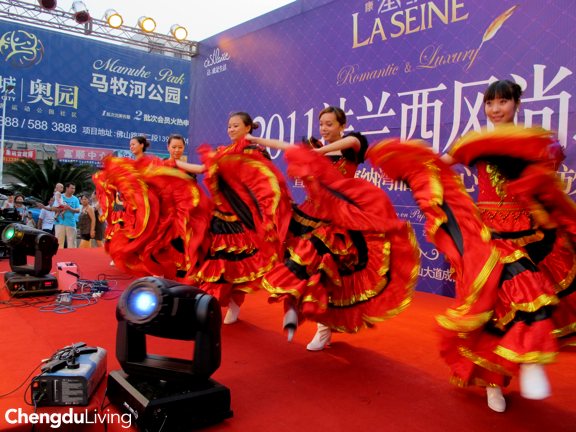 By and large, musicians and entertainers bastardize their skills to get paid performing at Grand Openings around China. I’ve met dancers and musicians of extraordinary skill who are forced to conform to the cookie-cutter line-ups at these Openings. They go like this:

Racism and The Hunt 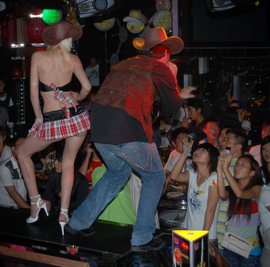 The MCs and agents are actually unscrupulous pimps that will sometimes hold off paying you until:

The phone call. (translated from Chinese)

“I think I’m free, what time and where?”

“Sunday evening in Deyang. *(note location is likely to be 1-2 hours outside of whatever city is named)

“There are no Blacks or Chinese in your band?”

“A girl from Spain, I think you’ve seen here before.’

“Oh right the skinny one”.

“Sounds good, see you then.”

No blacks, no Chinese? What the hell? What if I was an American born Chinese that only knew how to say ni hao?

Anyone who looks remotely Asian wouldn’t be approached for these jobs. A white guy who only knows power chords would be picked for a gig over a guitar virtuoso with an Asian face.

These days agents are a bit more opened minded about people with dark skin, however they are looking for a certain kind of dark-skinned musician; one with excellent music skills, good attitude and doesn’t seem “too African.” And sometimes they’re looking for the “Too African” stereotype.

Have Fun With It

A good friend of mine wrote a rock song about Sichuan Shao Kao (street barbeque), entitled “Basi De Hen” (Sichuan dialect for “Super cool”) which he performed regularly in 2009 at a bar in Jinli Street.

Zui hao chi zui hao wan, shao kao ni shi wo de ai ren (“The most delicious, the most fun. BBQ you are my true love“)

I played this song with him for a crowd of 10,000+ in a suburb of Chongqing and had the place roaring. The peasants jumped the barrier and reclaimed the seats cordoned off for” VIP” guests. The lethargic security weren’t able to control the mayhem. Fireworks went off on stage, fog machines belched smoke and soap bubbles. It was rock and roll, baby. 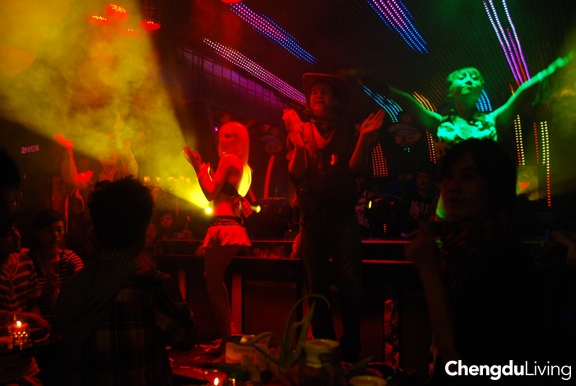 If the setting is right, the audience will get into the music, especially the Chinese songs. Recently some friends and I performed a rendition of “Chun Tian Li” at a banquet dinner for a medical supplies conglomerate at a Chengdu hotel. The whole place was singing along, toasting baijiu glasses in the air and swaying their heads to the thumping E string on the chorus. The vibe continued throughout our bluegrass and funk tunes and we were asked for an encore. Perhaps there is room for baijiu banquet rock stars, after all.

My roommate, a Spanish-speaking university student about to graduate from Sichuan University said,

I can’t teach English and there are few opportunities for Spanish-teaching jobs. How else can I pay for rent? I’m forced to be an actor!

A good friend of mine and guitar player from Japan proclaims,

We’d never have these “Laowai gigs” in Japan. The people would just laugh at you. Why do the Chinese spend so much money on bad entertainment? Only professional musicians have performances in Japan.

Although I hate the system, it’s got me under its thumb. I sold out.

Alas, for now these types of jobs are my most lucrative income; the US stock market sunk, I graduated in 2009 into a jobless economy. I’ve worked in China for 2 years, as struggling writer and editor who will try anything aside from teaching English to make ends meet.

I try to justify doing these gigs by knowing that I’ll save money and use my experience in China to eventually work on environmental law and policy consulting in Asia.

For example, last year I saved up money up money from White Monkey jobs in hopes of doing independent media reporting at the G20 summit in Seoul. Unfortunately, my passport was stolen, so the trip was canceled, and using the refunded money I got a huge tattoo instead.

What say you? Are White Monkeys justified? Are they sell-outs? Let us know what you think in the comments below.

52 thoughts on “Performing in China: Confessions of a White Monkey”