Traveling between Chengdu and Chongqing is now easier than ever before, with the “He Xie” (??) bullet train delivering passengers in style. The trip costs just 97 yuan one way and I took it recently, for the second time, to perform in Chongqing as Disco Death.

Why Go to Chongqing? 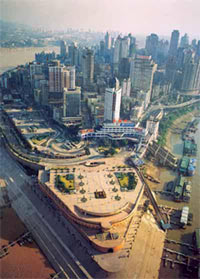 Chongqing has long been Chengdu’s sister city, albeit there’s a definite competitive air between Western China’s two economic powerhouses. While it bears a vague similarity to Chengdu, Chongqing has a style entirely its own. Hotpot restaurants adorn every nook and cranny of this hilly metropolis and rivers divide the half dozens sections into distinct parts. Unlike Chengdu, which features a concentric circle urban design with Tianfu Square at its center, Chongqing is a sprawling city which features an exploding population significantly higher than Chengdu’s. Few places in China feature the huge crowds, raw energy, and mysterious charm of Chongqing. You never know what’s hiding around the next corner.

If you’re taking the trip to Chongqing, don’t bother with anything but the newer He Xie train. The trip takes just over two hours and the entirety of the trip is fast and smooth as you’d expect a bullet train to be (as I write this I’m on a clickity-clackity train going to Chengdu from Kunming. Seats are large and comfortable and in each car there’s a readout which displays current speed and indoor/outdoor temperature. It’s fun to see the landscape whizzing by as the train approaches its 250km/h top speed. I distinctly taking a 12 hour seated train from Chongqing to Chengdu in 2005 – how far China’s infrastructure has come in those five years.

Since this is the fastest and easiest way to travel between Chengdu and Chongqing, tickets tend to sell out quickly. Especially those that depart in the afternoon or on weekends – so make sure that you book at least a day in advance. You might be able to book the day before you depart, but you’ll be pushing your luck.

I’ve personally made this mistake recently, assuming that tickets were available until a day before I depart, to find that they’re in fact sold out. If you find yourself in this situation, your options are the bus (which departs from Wugui Qiao bus station in Chengdu) or a private car. I opted for the latter, paying 120 yuan to sit in the front seat of a Chinese sedan driven by a young man who pulled over to the side of the road to swap the license plates on the outside of the car twice. The Chinese couple that traveled with us agreed that he resembled a Chinese 007 as he camouflaged his car to appear as if it was registered to a Chongqing local. This was an effort to reduce attention from local police, although anyone who’s seen how Chinese drive will testify to the leniency of local traffic laws. 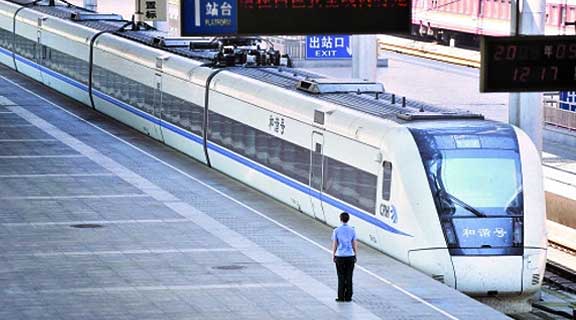 As always, you can buy tickets at the North Train station (????) from which the train departs, but this isn’t the best option since the lines are dreadfully long. On busy weekends you can see a queue of hundreds or even thousands, playing games on their cellphones (or just yelling into them) as they wait to get tickets. A better option is to go to one of the many train ticket offices around the city which show you a computer readout of all the tickets available, making the choice easy. One such office, where I always book my tickets, is across the street from the US Consulate on Lingshi Guan Lu (????) marked by a sign that says ??? – Train Tickets. You pay a meager fee for the convenience of saving an hour by going to the train station, but it’s worth it. If you aren’t in the south of Chengdu, you can go to one of the dozens of other locations which sell tickets, just ask a shop keeper or taxi driver where to buy them. Try this phrase: ?????????

Have you taken the He Xie to Chongqing? If so, I’d love to hear your thoughts.

32 thoughts on “Taking the 2 Hour Train to Chongqing”