In the run-up to the inauguration event at Hugo’s, we spoke with JingA founders Alex and Kris.

Chengdu Living: What is your background and what led to you coming to China? How did you get started brewing beer?

Kris and I have both lived in Beijing for over a decade, and fell in love with the city’s gritty charm and non-stop energy. Jing-A began as a homebrewing project that took off while we were still working corporate day-jobs. Our first set-up was classic homebrewing – big kitchen pots and plastic buckets with lids and airlocks, and we shared those first beers just with our friends. Brewing was a creative outlet for us, and it gave us something that everyone loves. We gradually increased the scale of our homebrew batches until we were borrowing space in commercial kitchens, and eventually we decided to get serious, investing in a small but full-featured commercial brewery, which we still use today. Once we finished building that in early 2013 we were able to transition to brewing full-time and we haven’t looked back since! What characterizes Jing A, and the beer which you produce?

We brew dozens of different beers. Some of them are Jing-A’s renditions of our favorite classic beer styles. With the Flying Fist IPA, for example, our goal is to make an American-style IPA that’s as good – if not better – than the many other versions of that style that you can find, including those brewed in the US.

Many of our other beers make creative use of seasonal and local Chinese ingredients. We’ll start with a spice, fruit, or sometimes ingredients as unusual as baijiu qu (a unique kind of brewing yeast/bacteria from baijiu production) or a popular street snack like bingtanghulu (sugar-coated hawthorn fruit), and decide we need to make a beer that showcases that ingredient’s potential in beer. This is a great way to make our beers represent the best flavors that Beijing can offer and connect with our local drinkers. We try to source ingredients from nearby farms that grow their produce with pride and care, like the export-quality chestnuts in our Toasted Chestnut Brown Ale or the award-winning “L-600” variety of watermelons we use in brewing our Beijing Bikini Watermelon Wheat. 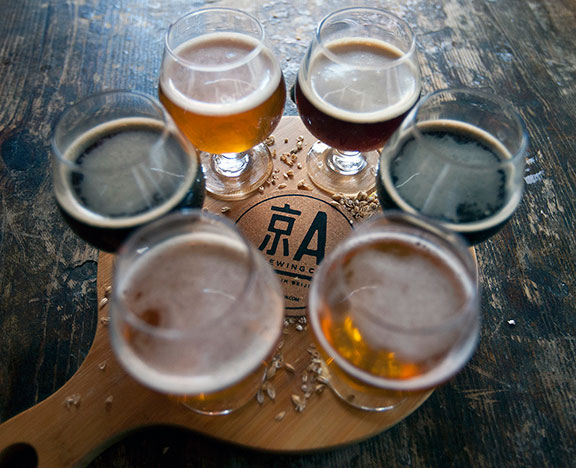 People often underestimate how long it takes to brew beer. Perhaps they think it’s like cooking food… you go into the brewery for a few hours, and at the end of the day you’ve got a finished beer. In reality every brew takes a full day (including lots of cleaning up afterwards), and the process doesn’t end there. It takes the beer several weeks of fermentation and cold conditioning in order to reach its optimal, clean and crisp flavor. We take care of the beer all throughout that period, taking samples, adjusting the temperature and carbonation, and in the case of our hoppy beers, opening up the top of the fermentation tank to add additional hops, a process known as “dry hopping”, which allows us to get more aroma and flavor compounds from our specialty hops (imported from the US, New Zealand, and Europe) without increasing the beer’s bitterness much.

In 2014 you opened your taproom in Beijing. Visiting the taproom says a lot, but for those who haven’t been, how would you describe it?

Our Taproom is the best place to try Jing-A beer, with around 16 varieties on tap at any given time, including many small-batch beers that can only be found there.

We’re located inside the 1949 compound in Sanlitun, which puts us right in the thick of Beijing’s main restaurant and bar area, but we’re surrounded by a beautiful green courtyard that acts a buffer between our Taproom and the busy urban center surrounding it. Inside our Taproom we’ve focused on the social aspect of drinking beer by dedicating much of the floorspace to communal seating, such as our large U shaped bar and the long high table that runs through the middle of the Taproom. Our food menu also reflect this, as we offer many shared plates like burger sliders, chicken wings, salads, charcuterie & cheese boards, and other appetizers.

Every month we hold several events at our Taproom, whether it’s launch parties for new beers, kitchen takeovers by chefs from other popular restaurants, or activities like our “Beer Mile”, in which beer fans race laps around our Taproom while drinking beer at several checkpoints. We also welcome the city’s community groups to hold events with us. We’re very grateful for the warm reception we’ve gotten from Beijingers since opening 2 years ago! 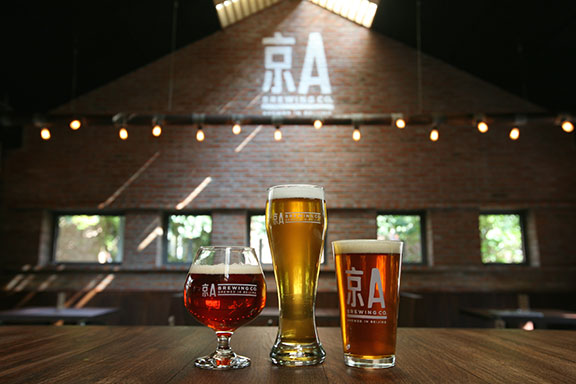 We are on the eve of launching JingA in Chengdu. How did that come about?

Chengdu has always been famous for great cuisine, and there’s a lot of overlap between foodies and people who love craft beer. As a brewery, we’ve managed to reach a level of production that allows us to brew enough beer to satisfy demand in Beijing while also offering our beer to a few more cities, such as Shanghai, Tianjin, Shenzhen, and now Chengdu.

This coincided with a couple friends of ours from Beijing, Pernille and Ella, moving to Chengdu to work on their startup GreenFood. Lucky for us, they were eager to help us by acting as our brand ambassadors! They connected us with Hugo (of Hugo’s Brewpub) to be our partner for logistics and distribution, and are will be doing everything they can to get more Jing-A beer available around Chengdu… so here we are today! 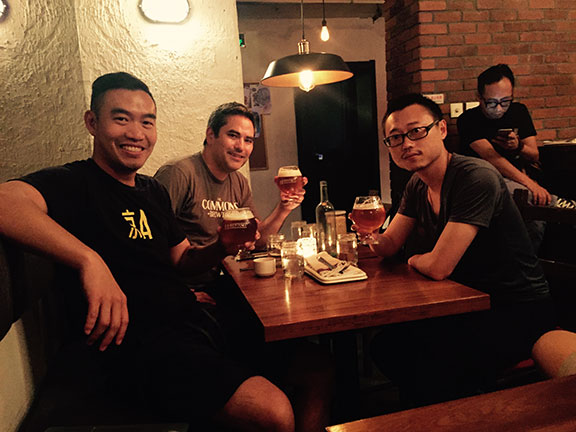 What are you aspirations for the Chengdu market, and how is it different from Beijing?

Chengdu is bound to be a center for good craft beer in China. Geezer at Chengdu Harvest is just one example of a local brewer that’s thriving there. We’re proud to say that this past month we worked together with him on a new collaboration beer, which we’re calling the Buck Wild Summer Lager, because it features buckwheat tea from Chengdu. Look for it at our launch party this weekend!

Our brand will always be deeply rooted in Beijing, but no matter where you are, the craft beer community is always passionate about quality, creativity, and variety. Good craft breweries produce unique and distinctive beers, and that’s why craft beer bars often have dozens of different taps! We can’t wait to share the fruits of our labor with the craft beer drinkers here in Chengdu, and we hope they’ll love our brews.

What are the most notable achievements or milestones that come to mind for JingA in recent years?

There were a few.

Moment one: ramping up production & getting licensing for distribution

There was a period in which our most popular beers, like the Flying Fist IPA and Mandarin Wheat, were selling so quickly that we were struggling to keep up with demand. Thankfully over the past year we’ve worked with a local partner to allow us to ramp up production, as well as get the right licensing to legally distribute those beers wherever we like. This has opened up new doors both on the sales side of our business, but also on the brewing and “creative” side as well. Taking that pressure off of our smaller original brewery allows us to use that system to brew a greater variety of small batch beers, whether they’re collaborations with visiting brewers, seasonal beers that we brew specifically in winter or summer months, or experiments testing out new ingredients and beer styles.

Back in Spring 2015 we traveled to Europe for our first international collaboration brews, with Bierfabrik in Berlin and Nøgne Ø in Grimstad, Norway. This was not too long after we had won our first international beer awards at the Asia Beer Cup in Tokyo (for Flying Fist IPA). This was a period where we really began to feel that our work in the brewery was beginning to be appreciated not just locally, but in the international craft beer scene as well. We’re always working to help Chinese craft beer be recognized as an important and rapidly growing part of the global craft beer movement, and this year we’ll participate in a number of beer festivals and events in other countries, whether it’s nearby in Korea, Hong Kong, Taiwan or Japan, or all they way over in the US. At these events people are always curious when they see a craft beer from China, especially the ones that we brew featuring local Chinese ingredients. When they taste the beers, the reactions we get are usually very positive, if somewhat surprised, and these people leave with a new appreciation for Chinese craft brewing.
Craft beer was new to Japan not too long ago, but now they have a thriving scene, with nine different Japanese breweries picking up medals at this year’s World Beer Cup (think of it as the olympics of craft beer). We don’t see any reason why China can’t follow a similar trajectory.

Where can people in Chengdu get JingA? If they come to Beijing, where should they find you? Do you have any online presence which people should check out? 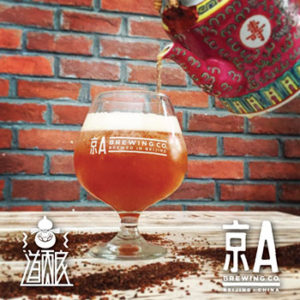 In Chengdu Hugo’s Brewpub acts like a “home base” for Jing-A, where you’ll always be able to find a couple of our brews, and even some specialty or small batch brews on occasion. By September there should be more places with our beer on tap, and Pernille and Ella will have the best knowledge of where it’ll be available.

In Beijing our beer is available at over 30 locations around town, so any visitor to Beijing has a good chance to come across our beer at one of the many restaurants and bars around town that stock it, but for the hardcore beer fans who want to sample as many of our beers as possible the must-visit spot would be the Jing-A Taproom in 1949. It’s also the best place to pick up Jing-A merchandise like T-shirts or growlers (if you’re looking to get beer to go).

We’re quite active on social media, and anyone interested in following our story and learning about new beers, tap locations, events, and promotions should follow us on WeChat (jingabeer), or our official accounts on Facebook (Jing-A Brewing Co.) and Instagram (@jingabrewing). Out website (jingabrewing.com) also has our blog, for those looking to read through the story of Jing-A, as well as a list of every beer we’ve ever made and all of our tap locations around China.