Note: This is a guest post contributed by Mandarin Blueprint, a Chengdu-based company which guides students towards proficiency in the Chinese language around the world. The subject of this post, pinyin, is a crucial first step which any successful Chinese language learner will need to achieve mastery of. It is lengthy, so it might be best to refer to this post in more than one sitting!

Chinese Pinyin is a system of roman characters created through a committee led by 周有光 Zhōu Yǒuguāng. Despite using the same letters at the English alphabet (well, almost), there are some major differences in Chinese Pinyin. Furthermore, the name “Pinyin” comes from the pronunciation of the characters 拼音 pīnyīn. 拼 as a character alone means “to piece together”, with an alternate meaning of “to spell”. 音 means “sound”, so “piecing together” (aka “spelling”) “sound”! See, it all makes sense :-D.

Goals of this Article:

Before we jump in, a reminder that we’ll be using the terms “Initials”, “Finals” & “Tones” liberally throughout this post. If you aren’t familiar with these terms, check out the blog post we did about The Sounds of Mandarin Chinese.

We mentioned above that we’re only going to touch on this briefly, and that’s because knowing the origin story doesn’t help you learn Pinyin. That said, the question “but why would they spell it like that?” comes up all the time. If there’s anything all these years of studying & teaching Chinese Pinyin has taught us, it’s that some people just gotta know the why. Don’t feel bad though, we’re exactly the same way ;).

Thinking About Why Pinyin Was Made the Right Way

The simplest answer to any & all of the “but why is it spelled this way” question is that the Chinese alphabet wasn’t made for English speakers. We all know that when you are trying to solve a problem, it’s all in how you look at it. If your premise is “Chinese people made an alphabet to help English speakers learn Chinese” you will judge it more harshly. However, that was not the problem the creators of Pinyin were trying to solve. 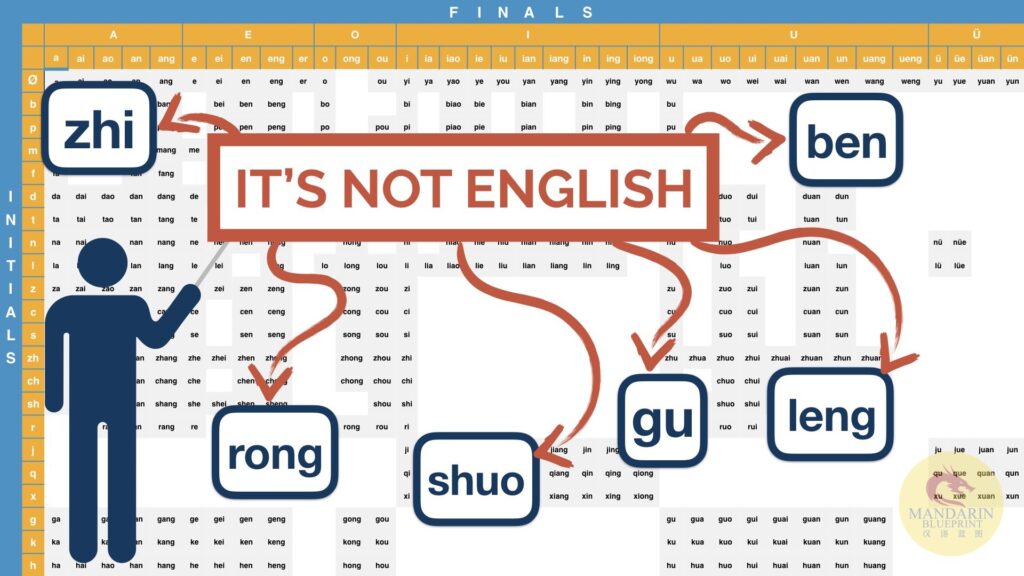 The Lay of the Land When Pinyin Was Invented

In the 50’s China had just been through quite a lot. Before WW2 there was civil war, which got put on pause during WW2 and then resumed after it. Yikes. Consequently there really wasn’t much of an economy once the new leadership took over in 1949, and the literacy rates were super low. Not too easy to study during war time. One of the reasons for the invention of Pinyin was to help raise literacy rates across the country. In other words, the Chinese alphabet was made for Chinese people, not westerners. 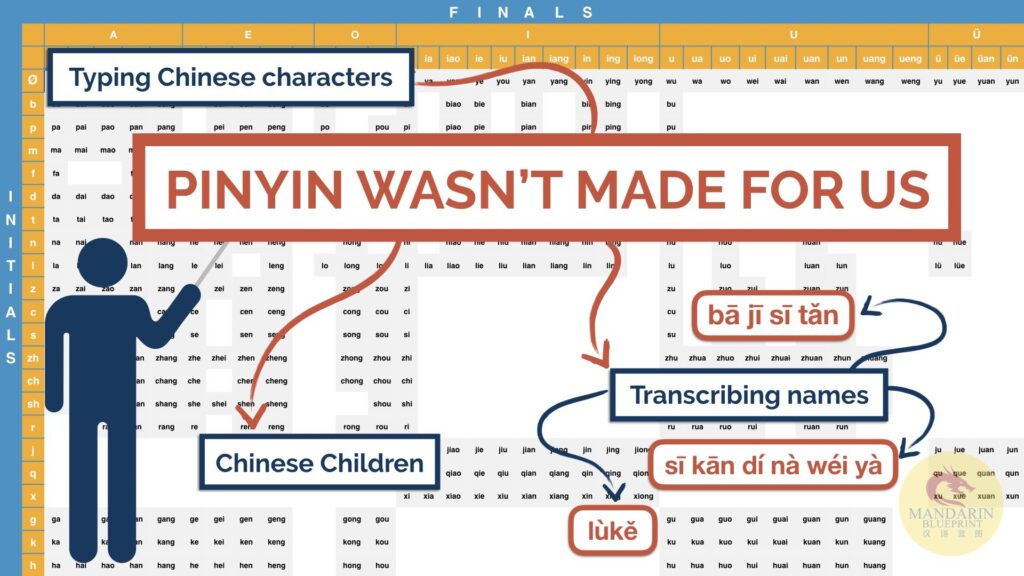 Not the Only System

Pinyin isn’t the only Chinese alphabet around, nor was it at the time of it’s invention. We find it a bit of a shame that they didn’t choose to go with the Yale Romanization, but no use crying over spilled milk. Furthermore, there are several other systems that are more intuitive and easier to read phonetically, but again, Pinyin was made with our phonetic instincts in mind. The fact is, Pinyin is the Mandarin Chinese alphabet romanization that is universally recognized across the mainland. Hence, using other systems should only be for help with learning pronunciation. Sadly other systems won’t be give you much practical help within the country.

First of all, take note of the fact that all the syllables of Mandarin Chinese fit onto one A4 page. That should be your first sign that conquering Mandarin Pinyin & pronunciation is an achievable goal. 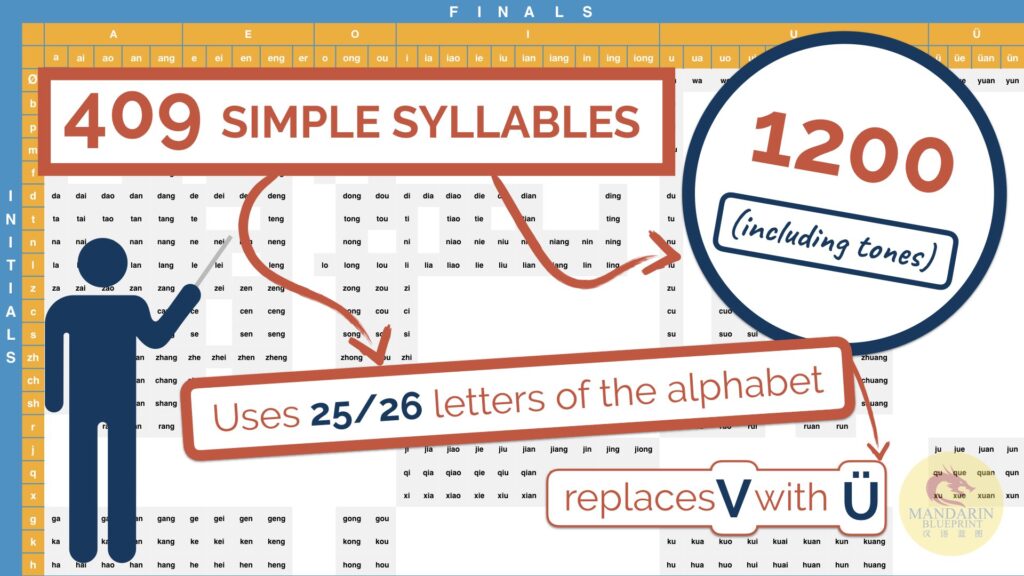 A Note on Spelling with Tone Marks & in Words

Chinese Pinyin represents how the initials and finals combine, but it doesn’t mention anything about tones. A tone mark ( ¯ ´ ˇ ` ) is placed above one of the vowels of the syllable (never a consonant). Let’s use the syllable “mao” to show how it works:

Why was “a” given the tone mark and not “o”? These three rules make it clear:

INCONSISTENCIES OF THE CHINESE PINYIN CHART YOU MUST KNOW

This can be frustrating for beginners, but as with everything in Pinyin, there aren’t that many exceptions to learn in the scheme of things. You’ll also have ample opportunity to solidify this knowledge as you continue to study Mandarin.

The Same Letters Don’t Always Have the Same Sound 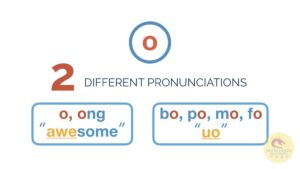 This is an article and sounds are audio based, so if you want to learn more about these inconsistencies you can check them out in our Pronunciation Mastery video course. That said, here are a few tips to give you a hint as to what you should be aware of:

As we mentioned, this is not an exhaustive list. We just want you to know what you are getting into. It’s weird…Pinyin fails to be intuitive a lot, but because there are so few overall syllables it is possible to learn everything that’s inconsistent about it.

We mentioned nasal finals “-in” and “-ing” above, which are spelled “Yin” and “Ying” by themselves. What’s up with that? 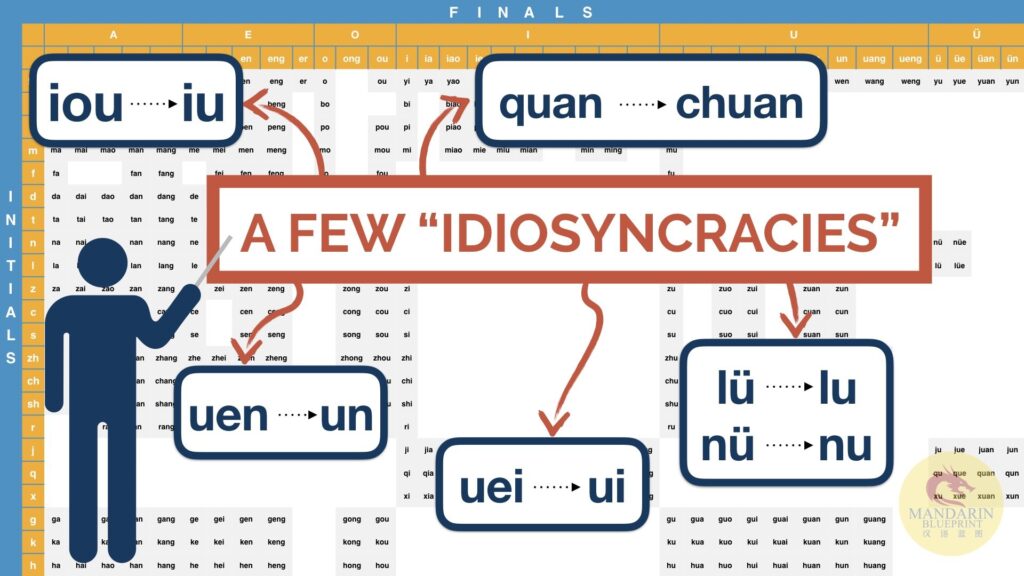 Chinese learners often feel perplexed when considering the spelling choices of the Pinyin creators. Sometimes the exact same sound is spelled differently. There are even silent letters that at first glance seem pointless. It is important to be aware of these moving forward.

The simple finals i, u & ü aren’t spelled in this way when they are either by themselves or the first letter of a longer syllable. These are rules that affect the “i”, “u” and “ü” sections of the top “null Ø initial” row of the chart.

Here are the rules:

As a result of reading these rules, some of you might be wondering, WHY WOULD THEY DO THIS?!?!?! We empathize completely. Here is a way you can think about it:

As you can see, this would be a huge pain in the neck to read if it weren’t for these extra letters. It’s especially hard for the words that require two syllables to be spelled together as a word (i.e. yǐwéi vs, ǐuéi) 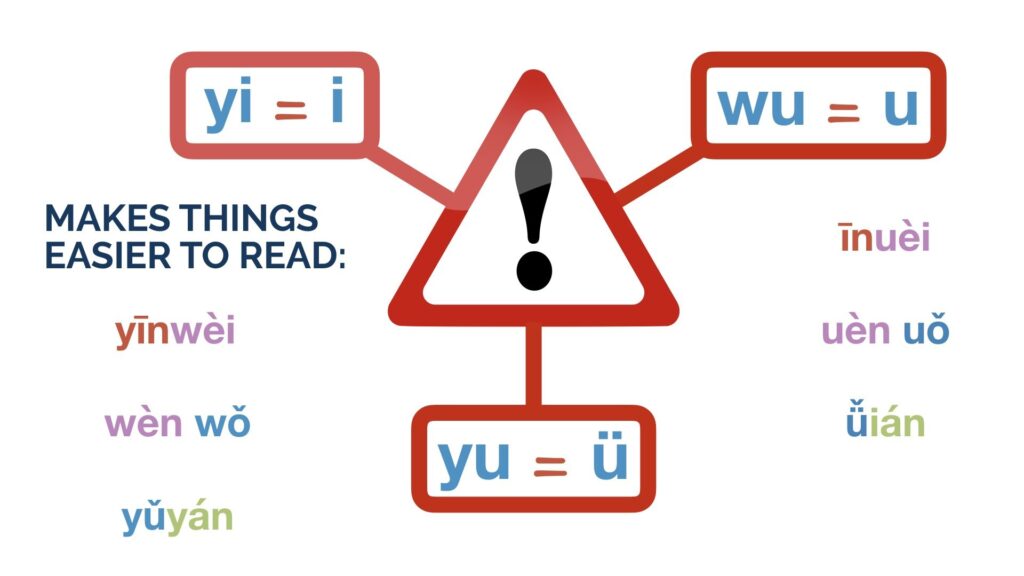 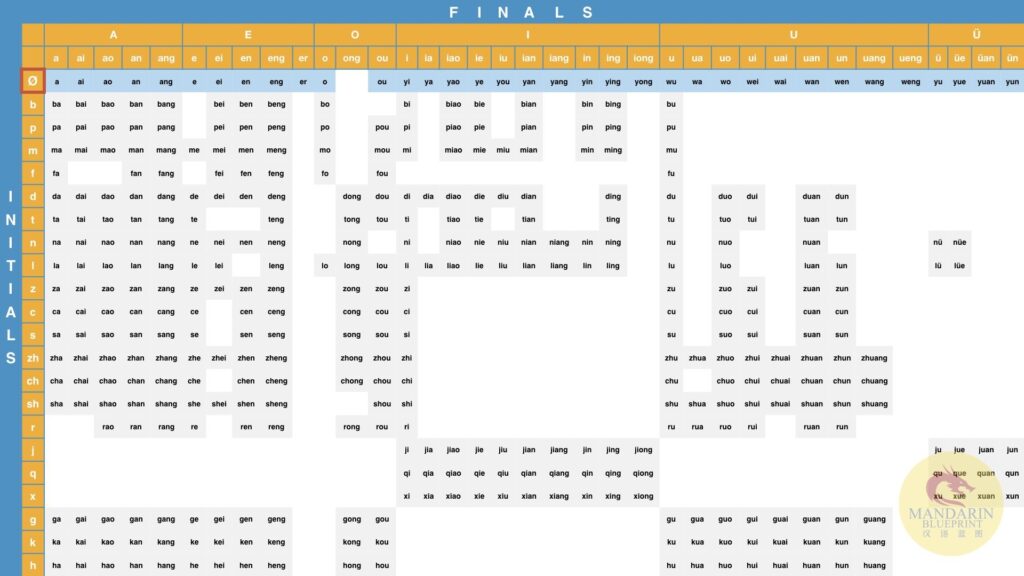 **Only the Ø null initial row displays this phenomenon. Consequently, as soon as you add an initial like “zh-“, “x” or “j-“ in front of one of these pronunciations, they revert back to their spelling of “i”, “u” or “ü”.

Finally, “nü, lü, nüe & lüe” are the only four pronunciations in the Chinese alphabet that use the letter “v” when typing. For example, when you want to type the word 女人 nǚrén “woman”, the correct input method is “nvren”.

Pinyin omits letters of important finals three times. Do not be fooled! Articulate these letters as if they are still there.

First of all, the final -iou by itself follows the rule mentioned above of “Ø + iou = you”. So, does “m + iou = miou”? NO! Not in spelling anyway. It is still pronounced as“miou”, but it is spelled “miu”. Pinyin omits the “o”. This is true all the way down the chart. 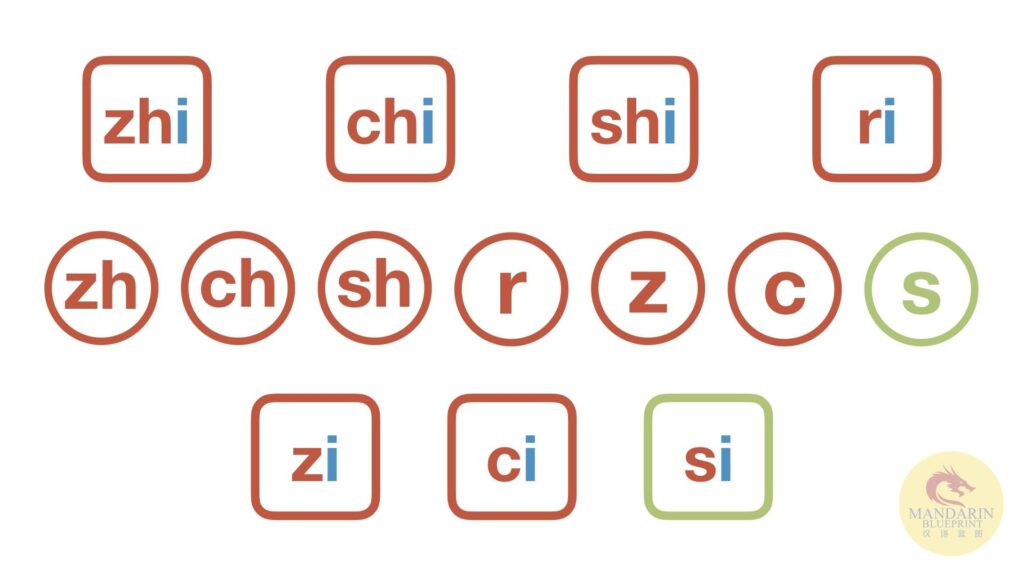 Due to the limited number of letters available in Pinyin, there are seven syllables in Chinese whose “vowel” sound doesn’t sound like anything in English. The spelling of these sounds is “zi, ci, si, zhi, chi, shi, ri”. If you look at your Pinyin chart, they are the seven syllables immediately to the left of the big blank white space in the middle. Apart from these seven, every other time you see the letter “i” in Pinyin, it is pronounced like the “ee” in “see”. However, these syllables are articulated using a different vowel sound. Hence, the “fake” i. Actually, the ‘vowel sound’ (if you can call it that) is even different between “zi, ci, si” & “zhi, chi, shi, ri”. What gives?

Why Choose “i” & Not Another Vowel?

Remember, the creators of Chinese Pinyin had to fit the sounds of Mandarin (round peg) into the English alphabet (square hole). They wanted every syllable to have at least one vowel, and no wonder, can you imagine the official spelling of these syllables being “z, c, s, zh, ch, sh, r”? That would tough to read.

YOU CAN MASTER CHINESE PINYIN

The concepts discussed today are not exhaustive in terms of the many idiosyncrasies that exist amongst Pinyin. However, they are the most important to be aware of as you jump deeply into this project, and that is what learning Pinyin is. A project. Furthermore, pronunciation in general never really goes away in terms of your attention and focus as a learner, it simply diminishes in needed energy expenditure over time. That said, as “projects” go, Pinyin is not a big one.

Consider that English has approximately 16,000 distinct syllables. Pinyin has approximately 409, but for the sake of easy math let’s round to 400. Pinyin fits onto one A4 page, implying that English syllables would take up 40 A4 pages (16000 ÷ 400). Holy cats. That would be just plain silly to start learning English by memorizing those 40 A4 pages. In that circumstance, it isn’t even worth thinking about. Chinese though? You would be a fool not to focus a lot on it in the beginning.

Just think about all the benefits you will being clear on all syllables of the language & how they are said. Here are just a few:

So how long does it take to learn the whole Pinyin chart and relevant traps & pitfalls? Depends on you. How many hours a day will you spend on it? We’d say anywhere from a week (super-dedicated) to a couple months (20 minutes a day). It is a great way to get to know the language.