I’ve always been a Southwest China Laowai and will be ’till I die. And to narrow it down, I am a Dirty ‘Du (Chengdu) Laowai, which is different from a Kunming Laowai (holla!) or a Chongqing Laowai (holla!) or anyone else who isn’t Chinese and lives on the Horse and Tea Trade Route . We’re all different and different parts of China attract different types of foreigners. I have huge respect for Xinjiang Laowai, a little respect for Beijing Laowai and I feel an affinity of sorts for laowai out in Shaanxi, Anhui or Shandong – those rusty provinces without the Internet.

My Affinity With Chengdu

I have been moving from place to place all of my life and I fear that I will never find a place that I can truly call my home, but when I fly into Chengdu’s Shuangliu International Airport, breaking through the cloud blanket onto dusty south Chengdu, I feel good. I start beatboxing to myself, find the nearest cabbie and start spitting my dirtiest Sichuan hua. The cabbies are awesome because they take it in stride and just hand me a smoke.

I love Chengdu. But I gotta go.

I took a job editing Chinatravel.net in the antithesis of the ‘Du: glitzy, glamorous Shanghai, hereafter known as The Hai.

You know how you can tell a German apart from an Englishman or from an American with just a glance at his bearing, clothes, facial expression and the look in his eyes? The same thing exists for laowai.

When I see a Kunming laowai walk down the street I know it when I see it and he knows it too. He might be a little bit dusty and his dress code screams “Fuck a 9 to 5!” and when he swings his head around at the scent of Southwest cuisine a lone dreadlock might crack a passerby in the jaw. I know he is from the Spring City and he knows I am from the ‘Du.

When I see Beijing foreigners walk around I can usually tell that too, because although they tuck their shirts in and most likely do not sport dreadlocks, there is a grittiness about them that bespeaks underground clubs and a circle of friends dominated by thinkers. Laowai from the provinces inbetween Chengdu and the coast have that special lost look about them that says: I may have forgotten my mother tongue and my stomach can’t handle Mom’s cooking anymore. 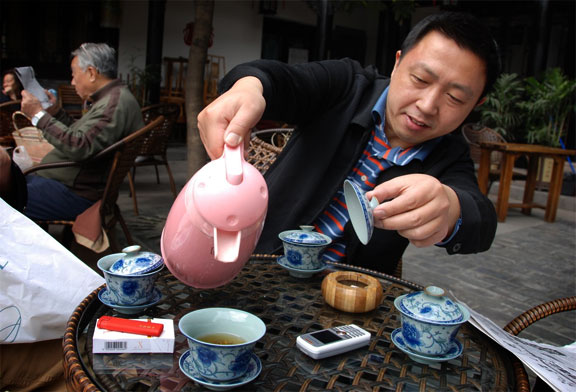 Shanghai is different from the rest of China in a way that isn’t exactly cool, although laowai in Shanghai would say that Shanghai is by far the coolest city in China.

There are a lot of ex-frat boys and MBA grads here: East coast boarding school cats with trust funds and famously rich grandparents and I have never identified with them or their hand-me-down sense of superiority. The Hai also has a large population of young, beautiful foreign women. This is a very unique thing in China, because as we all have noticed, beautiful foreign women don’t often venture out to Chongqing or Urumuqi. They tend to stay where the living is easy and the shopping diverse.

Way back in the day I read The eXile book: Sex, Drugs and Lies in the New Russia , founded by Mark Ames and Matt Taibbi and they mentioned a phenomenon known as “expatella,” which refers to Western women trying to live in places like China and Russia.

Western women tend to lose out to local girls in one-on-one confrontations over men, for a variety of reasons that I don’t really care to get into right now. So, in order to distinguish themselves from local girls, Western women tend to adapt a somewhat bitter, perhaps wary attitude towards Western men, maybe they go ahead and give local guys a shot, maybe they go all out and try and be the party girl, but basically, they change a bit in order to compete with local girls. No disrespect, I’m just calling it how I see it (and others have seen it as well).

Now in Shanghai there is a Western woman population with some confidence and some style — they might still display a few expatella traits, but its not the same as the Western girls out in Chengdu. Its interesting and merits further investigation.

Shanghai has a bit of Gotham to it, with all of the high rises that block the views for most people, but at the same time there are shopping districts like Xintiandi and the like where you can watch trophy ladies strut their stuff in high heels, swinging tiny little brand name shopping bags as they saunter by. Off the boat Europeans and rich Middle Eastern families are on display.

There are a lot of hot, nice cars cruising up and down the French Concession and you can hear them revving up and down the boulevards late at night, no doubt filled with laughing harlots in Daisy Dukes and ketamine addled rich kids who just don’t give a damn.

Every morning when I head to work, I take the subway (Line 10 to Line 2) and the 9-5 crowd really trips me out. I feel like a lurid observer, but then i look down at my key card dangling from my neck and realize separation is an illusion. I remember laughing haughtily at tales of stuffed subway cars and bobbin’ my head to Del’s Bob Dobalina (Youtube blocked? Freedur has the key!) track and now I find myself elbowing fat sweaty dudes out of my way so I can get to the escalator 2 seconds quicker.

Its just one of those types of towns: up and coming, flush with office workers, fast cash and loose women. The city feels like it is trying to prove to itself and to everyone else that it truly deserves to be mentioned along with New York and London and Tokyo by doing all the things expected of an up and coming city. Whatever I might think about offices and suits, you gotta give propers where propers are due: Shanghai is goin’ global and doing it in style. 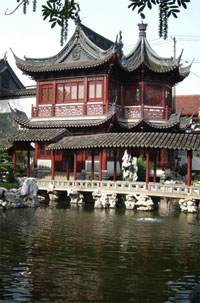 Now, Hong Kong has a similar environment — riches, hard dialect, good shopping — but the vital difference here is history. Shanghai has the French Concession and a history of being the Pearl and such, but the Hai is constantly re-inventing itself. It lives in the trendy moment, just a hair’s breadth behind Tokyo and a length or two behind Paris or New York.

But Shanghai tries so hard to be those cities and that smacks of fakery and pretender-ism. Hong Kong has an elegance that permeates the trendiness of this Fall’s coming fashion, whereas Shanghai seems to be constantly  re-designing its own identity. It’s a fashion-money-sex city in many ways, but its the fashion of the 20-something sex kitten, constantly changing her hairstyle, not the more mature diva, whose honed style influences the kitten.

What is the Hai Exactly?

I am not sure yet. I go on the impressions I built in my many stays here. I have friends here that can fit in anywhere and will be my friends for life, transcending any No Coast – East Coast rivalry that really only exists in my head anyway. It is one heck of a leap, from down low country living to a 9 to 5 in the big city, but I remain adaptable and life here will most likely proceed according to Sascha Time as it always seems to.

I hope that over the next few months I discard my “Chengdu Spy in the Belly of the Beast” mentality and just be a missionary of Southwest culture out here or — which is much more likely — just accept the fact that repping your spot stems from fear and enjoy this new chapter of my life: Dirty ‘Du Veteran Chillin’ in the Hai.

63 thoughts on “A Tale of Two Cities: Chengdu vs. Shanghai”