It’s mid-autumn. The lotus leaves have wilted, leaving a desiccated crop of dead brown stalks in their place. Stalky shadows on the water look dark against the pallid sky. In between ravines of this withered foliage are long hips of grassy, muddy earth. In the swamp waters of Hetang Yuese, a foreign woman wades almost knee-deep in just her trousers. Long, gossamer brown hair swarms around her. For those who’d recognize it, her image recalls a painting by John William Waterhouse, “The Lady of Shallot,” a scene of antiquated beauty that famously contains a woman floating similarly in a pond, sort of otherworldly.

Rather than be the subject of a painting, however, the woman is a target for a nearby throng of spectators, photographers and journalists. As she moves nearly imperceptibly through the viscous dead-lotus waters, another person straddles a ravine, bottomless, clinging to the mud with bare hands and feet — head invisible amid clumps of grass. Nearby, another man, face and hands covered in white makeup, performs butoh-like dance movements in the grass, shirtless. Other strange-looking souls cluster on the muddy land bridge between the waters, having removed items of clothing, as well as any reservations.

They are here explicitly to perform in a public setting; modesty is not allowed. This is experimental live art in Chengdu.

That was on October 14th, the third full day of the UP-ON International Live Art Festival, only the second of such live events to occur in four years. Spearheaded by local organizers devoted to curation and experimentation, UP-ON was founded in 2008, when the central government lifted an egregious ban on live performance art. The ban had been in place since 2001, when state officials reacted in horror to what they saw as a peril to stability and a danger to public life, although it had previously been welcomed. The first UP-ON festival, unique from this one, included Japanese artists Arai Shin-Ichi and Yoshinori Niwa. They put on dramatic works that may, indeed, have seemed provocative in light of performance art’s recently contentious history.

Chengdu-based international artist Zhou Bin, Chengdu sculptor Yan Cheng, and artist Liu Chengying curated this huge undertaking, which also serves as a platform for international dialogue, scholarship, and public exchange. Zhou Bin has a long personal history of doing just this: turning public places, tools and ideas into groundwork for a broader discussion. It’s one of the foundational underpinnings of the artist’s philosophy, distinguishing him from the mainstream Chengdu art market.

From the mid-1990’s until 2001, Chengdu had a singular reputation for its “live art” (???? xinwei yishu). Both productive and socially relevant, artists like Dai Guangyu, Zhou Bin, and Liu Chengying instigated ground-breaking performances that called into question the city’s priorities, including the preservation of fresh water and historic sites. This instructive and socially engaging way of confronting crucial public issues had a profound effect on the people involved, bringing a surge in community-based dialogue that could never have been started by the state.

But the city’s constructive relationship with public art ended in 2001, when the Ministry of Culture enforced a directive formally prohibiting all public performances. Zhou Bin, Dai Guangyu and their work were driven underground. Not everyone in the city has had the opportunity to see real Chengdu “live art.” Unless you’re a student of one of the artists or organizers, you’ve probably heard of it, but you may not remember ???? from its glory days, before it was went covert.

Now that its back, Chengdu-based artists want to make sure that live art stays free. The artists invited to perform here this year are all highly sensitive to the context, history, and relevance of what they’re doing, yet they’ve done nothing to suggest the “bloody…brutal” spectacles that once deliberately provoked audiences to outrage, thus beginning shut-downs by officials.

This year, UP-ON took place at three major consecutive locations in and outside the city. The first, at Sichuan University College of Art, was occupied for more than two days, while a host of indoor, outdoor, and in-between (think, scrambling up a performance space wall) exhibitions, lectures, and happenings unfolded. Boris Neilsony, a notable experimental artist and event organizer from Germany, instigated a joint performance with his long-time collaborator Alastair MacLennan, of Northern Ireland. Other participants from Europe, Israel, Thailand, Taiwan, and mainland China were present.

The first full day began slightly before Chinese artist Xing Xin’s installation, which literally consisted of a week-long endeavor to push his broken-down SUV directly from the south side of Chengdu all the way to the north. This installation was concluded at the end of the week: I got word as I was getting on a plane to Beijing on Sunday that the artist, car and crew had all made their way to the finish line in relatively good shape.

Guo Qiang, a performer from Xi’an whose work also involved a long trek, didn’t return to the scene that day. I chased him down the street for more than a mile after he’d stormed out of the spotlight, roaring at audience members. But the artist, glazed from head to toe in pure honey, toting a basket and tarred in black sesame seeds, kept going.

Artist Xiang Xishi, also of Xi’an, startled spectators with his use of tension and violence as he removed one shoe and began sliding a very large butcher knife back and forth along the floor to members of the audience with his bare foot. Others, including the striking Tamar Raban, a fringe theatre artist from Israel, left onlookers transfixed by their unpredictable acts, Raban spelling out the word “P-E-R-F-O-R-M-A-N-C-E” on the museum walls.

Day Two featured live performances from Cai Qing, Xi Gao Yuan (the man in whiteface at Hetang Yuese), Neilsony and MacLennan, Wang Chuyu, and others. As a notable charge against the rigidity of art education in China, Cai Qing masterfully destroyed a giant plaster head of The David, a blown-up version of one of the most ubiquitous teaching materials for art professors of drawing. Singaporean artist Jeremy Hiah recapped the day’s events when he attempted to auction off objects and remnants from the other artists’ works- including a piece of the plaster cast. It was a grand social demonstration about the so-called marketing of creative artwork, its message not lost on participants.

As mentioned, Day Three took place at Hetang Yuese, and had a considerably different effect on viewers and participants. Artists were exposed to the elements for hours, at times wading through the lotus pond’s deep, muddy waters in weather that wasn’t the warmest, but had a cool humidity. The mere aspect of physical exposure lent the performance a feeling of true vulnerability, one which only compounded with the very public and uncontrolled environment. It definitely made artists more aware of what they were doing, and of the physical limitations and consequences. Not a single action or movement went unnoticed.

Tourists, moreover, were a common presence, sometimes stepping into the performance space, sometimes even choosing to participate. When an unsuspecting vendor stumbled onto the scene as he was selling chunks of sticky bositang candy from a wicker basket, something he does there almost every day, it was an experience worth remembering: he joined in the live art event, contributing with jocular spontaneity, honesty and curiosity. People applauded.

On the fourth day, performers moved to the new Sichuan Conservatory of Music campus in Xindu. There, in a new university space, artists such as Wen Peng and He Chengyao performed, joined by Nopawan Sirivejkul, Shimizu and others. Dong Jie, a Chinese artist whose work occupies a distinct place between participation and voyeurism, addressed with her body the “survival state” of women in Chinese society. She attracted a crowd, though whether most were drawn in by her message, or the simple stage presence of a woman in unclad defenselessness, it was hard to be sure.

One of the final pieces that day was delivered by Macao artist Wu Fangzhou (Ng Fangchao), who drew viewers around him to the rooftop area of the University cafeteria, making subtle references to food as he threw a blackened fowl carcass in the air and encircled his performance space with saran wrap.

The UP-ON Festival stands apart from other art events in Chengdu because of its experimental nature, its resistance to market forces, and the uniqueness of public art’s evolving status in China. Organized locally and presented to University students, museum-goers and members of the public, the festival nonetheless receives some support from outside sources like the Goethe Institute, an German arts and culture organization working in Germany.

Zhou Bin, a master of tasteful curatorial criticism, knew to quickly gesture to members of the public or audience to get off the “stage” when necessary. Maintaining a reserved, but firm, oversight of events as they unfolded over the days, he skillfully wove through the crowds. Having stepped into a charged arena, Zhou Bin and the other artists knew they must somehow work with one another to support, and not impede, local freedom of expression–in the face of local suppression of their freedoms. Organizers reinforced an air of quiet and respectful order at UP-ON that reassured festival-goers and drew in many crowds, and did not suggest an atmosphere of “policing.”

The lifting of the 2008 restriction on live art signaled new opportunity for the city’s arts community. Following this event, a host of artists from UP-ON moved to Xi’an, where they continued enacting live performances and planning future events. Regardless of the next UP-ON Festival date, Chengdu has had a special visitation from unique members of the global arts community. They are the kind of people who, like their Chengdu-based colleagues, want art and freedom in China to get on track. A for those who came from outside, Chengdu left a good impression on them. Many, many factors are involved in the organization of such an event. While no longer facing explicit condemnation from their government, performance artists still contend with a myriad of issues and challenges in the execution of their work, dissemination of ideas, and presentation to the public. It will probably be a long time before that changes. 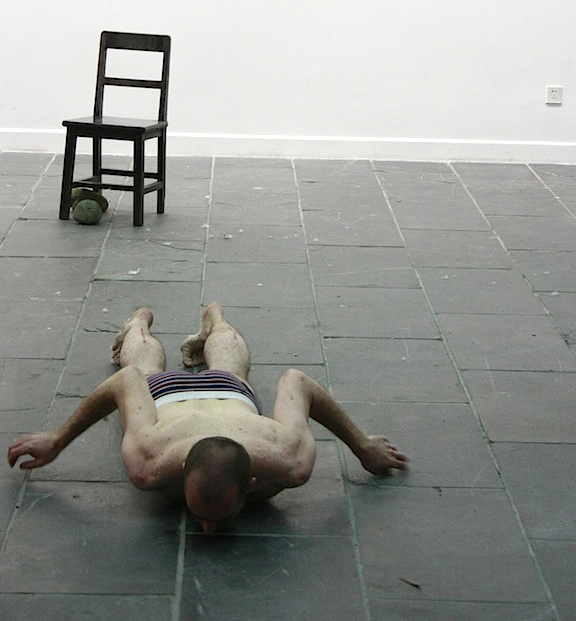