A few years ago I interviewed Jamie, an American training and teaching Brazilian Jiu Jitsu in Chengdu. What’s changed since then? For starters, there’s a new figurehead in the local jiu jitsu scene: known on our discussion forum as JerryS. After speaking to him briefly about Chengdu’s burgeoning jiu-jitsu subculture, I thought it’d be a good time to look at how the art form has developed in Chengdu in recent years.

If you have any questions or are interested in training in Chengdu, leave a comment or check out the links below the interview to find out more.

Chengdu Living: Who are you and what brought you to Chengdu?

Jerry: My name is Jerry, I’m an American who came to Chengdu in October 2011, and a brown belt in jiu jitsu (one level beneath black belt). Initially I came because to work, to teach English for two years and travel, then return to the states. Yet since Brazilian Jiu Jitsu was very small in Chengdu at the time, I decided to take charge and help spread the art form in this great city.

Jerry: I trained at Fabio Araujo Brazilian Jiu Jitsu in New Haven, Connecticut. I’ve been training under Fabio for 12 years now and currently hold a brown belt and I was given the nick name ‘Wu-Tang,’ because I was one of the few Asian people that trained. Fabio is a 3rd degree black belt directly from the legendary Carlson Gracie Sr. Without Carlson, Brazilian Jiu Jitsu and the larger sport of mixed martial arts would not be what they are today. 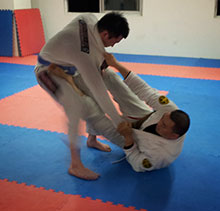 Training in the states was rough, because I’m from the ‘old school’ of BJJ. Fabio always stressed that the art be used for hurting and maiming people. The good ole’ Carlson Gracie had a no mercy approach. Fabio always pushed us and rarely used positive reinforcements. Training was very intense; killer warm ups, no drinking during class (the worst during hot summer days) and rolling (training) for over 1 hour non-stop! God, I miss those days. Fabio’s favorite quote about me: ‘Porra Wu-Tang, quit opening your legs!’

Here at CDBJJ, I do not use that military mentality or anything negative – far from it, instead I use positive reinforcement to help students achieve their goals, rather it be sport BJJ or for combat applications. The thing with the old school type of BJJ was that it never garnered new students and with Chengdu being a relaxed city, the last thing someone needs is to be called a wimp.

Yet one of the commonalities between CDBJJ and Fabio Araujo’s BJJ (and various other gyms that I trained at) is that BJJ creates a community for those who train. There is a common bond between humans that bleed and sweat together, and with BJJ it’s ever more so. There’s a sense of unity with one’s training partner that can not be shared as sports. A BJJ practitioner can easily make friends with anyone of different origins, socio-economical classes, ethnicity and language. With that said, every gym has “that guy” which people all want to avoid.

Chengdu Living: How has the BJJ scene in Chengdu grown since we published our interview with Jamie?

Jerry: What Jamie started was a great thing. The club during his time pretty much was the base for BJJ in Chengdu. Most of his students have stayed with the club (Chengdu Brazilian Jiu Jitsu) are still currently training under me; Boris, Rocky, Anton, Eric, etc. Without those guys, the BJJ scene here in Chengdu would be non-existent.

When I first took over as a leader of the local organization, or rather was elected by the students, there were maybe 5 to 7 students per class. Two years later,  the average now is between 15 – 22, with over 50 unique members total. With MMA continuing to reach an ever larger audience, I believe attendance will increase another 20-30% within the next 6 months. There’s a lot of growth happening.

Jerry: The club originally trained at a Karate studio until June of this year. Since attendance for BJJ was increasing, we had to find a new facility. With due diligence from the other administrators from the club (Boris, Rocky and Anton) we found a location right near Tianfu Square in the middle of the city. I would say about a 5 minute walk from the city center.

Of course with our club being there, we had to invest a significant amount of time and money into making it a training facility. We outfitted it with things like heavy bags, jump ropes, boxing mitts and kicking pads. Being that the club shares the space with other various clubs, cleanliness is a huge factor for me. I do not want my students to train in a dirty place, so I make it my responsibility to sweep and mop the mats before every class. The last thing I want is for someone to catch any diseases or illnesses while training under me.

Chengdu Living: What can people expect if they come out to train with you in Chengdu? What’s training like, and what does it involve?

Jerry: When anyone comes to train, he or she can expect me to clean the mats prior to class beginning. After that, we would do a 20-30 minute warm up that includes stretching at the end. Then a small break to rehydrate for techniques. Drilling techniques can last anywhere from 30-45 minutes. The remainder of the class (usually 45 minutes), is for sparring. Each round is 3 minutes long. If someone has a tournament coming up, we train with greater intensity. I am always watching and keeping an eye on everyone, telling everyone to be careful with each other. Under my guidance, I try to keep everyone in line to prevent injuries.

Chengdu Living: What do you think Chengdu needs to move to the next level of BJJ development?

Jerry: Chengdu’s local culture is, in a word, relaxed. Most of my students are from the Chengdu area, with a handful of foreigners mixed in. If I am off for split second, students will just idle and ‘relax.’ During time to roll (spar), I usually have to pair up students. Normally in the states, the instructor will rarely pair up students, because it’s the student’s responsibility to spar with others. I believe for my students to get to the next level, they have to ‘train’ more. To take initiative to spar and to roll. Once they do that, the sky’s the limit to how far the club can progress.

But that is not saying that CDBJJ is not doing well – far from it – growth of the club has exceeded my expectations. Sometimes the club gets visiting purple and brown belts from various countries. When they visit, I usually spar with them to test their skills. After that, I would tell them to roll with Rocky (a very tough BJJ fighter who is a blue belt) or Anton (high level blue belt as well and also the MMA instructor). From what I have seen, the visiting BJJ practitioners would have a tough time with Rocky and Anton and also various other members of the club. I was shocked to see this. I believe that within a year or two, our club has a great chance at winning BJJ championships in China.

Chengdu Living: How do you think BJJ is perceived by Chinese people? How does it compare to Kung Fu?

Jerry: BJJ is relatively unknown by the masses in China, but for those who seek us out, they usually will stay and train. As for Kung Fu, I am not too sure, I never studied Kung Fu in China and I believe most of my students haven’t either. Some of the members has various martial arts experience, such as Tae Kwon Do and San Da. BJJ and MMA is slowly becoming popular in China.

Chengdu Living: What is the BJJ scene like in other cities in China? Have you visited or participated in those?

Jerry: BJJ is becoming popular in the big mega cities in China, such as Beijing and Shanghai. With the Ultimate Fighter show coming to China, I believe BJJ and MMA will explode in popularity. In Beijing, there are many various gyms. Beijing has less than 7 black belts total, and Shanghai has a few as well. Chengdu has two brown belts. Hopefully I will get my black belt. But getting it is political, so for now I’d rather stay a brown belt.

Hong Kong is a different matter. I believe in China, the best place to train BJJ is in Hong Kong. There are 10 to 15 black belts there. When I visited the city, I visited many gyms. Many great gyms in that city – it’s hard to go wrong in Hong Kong.

Also like to add ADCC (Abu Dhabi Combat Championship) is coming to Beijing this year! In fact the date is Oct 19-20, this event will house the best grapplers this world has ever seen competing for cash prizes. It’s held once every two years, the biggest names in grappling and MMA will attend and grapple at this event. A huge plus for China’s BJJ and MMA scene. I am already making plans to go and hopefully many members of CDBJJ will attend as well.

Chengdu Living: What’s the process for someone interested in training BJJ in Chengdu?

Jerry: If anyone is interested in training, visit our website at CDBJJ.org or on Facebook. We offer 4 classes a week: Tuesday- MMA class, Thursday- BJJ Gi (the Jiu Jitsu formal suit) class, Saturday- Open Mat (mostly no-gi) and Sunday- BJJ Gi class. Each class is 40 RMB, no monthly fee yet, which allows students to be flexible with their training regiment.

Chengdu Living: What do you think BJJ in Chengdu will look like in 5 years?

Jerry: I believe BJJ in Chengdu will become popular. Of course this means I will have competition, but no sweat, I still believe that the technique I teach is unique and rare. I also think that within 5 years, this website with be filled with thousands upon thousands of photos:

Chengdu Living: Anything else to add for Chengdu-based BJJ fans, or those interested in learning?

Jerry: All I can say is ‘come train Porra!’ And one can find me on Chengdu Living Forum as well!