Although the 7.1 magnitude earthquake that hit Yushu Prefecture in Qinghai Province last week will not match the Sichuan earthquake of 2008 in terms of numbers of people lost, there are many things about this most recent disaster that reminds me of those first few days after northern Sichuan was devastated.

In the media coverage, both domestic and international, themes that dominated the coverage two years ago are cropping up much earlier, such as the fate of schoolkids and the possibility that shoddy construction contributed to the scale of the damage. The response both from relief workers, soldiers, common citizens and the government mirrors the response in 2008, but not due to a natural, spontaneous outpouring of sympathy, but now more as a standard response to fellow citizens in despair.

When the Sichuan earthquake of 2008 first hit, no one guessed that the number of casualities would reach 80,000. In the first few days, news trickled in from Chongqing, Chongzhou and Mianyang that a few hundred had died here, a few hundred more there. It was only after reports started coming in from Dujiangyan and farther north in Shifan and Beichuan that the scale of loss started to take hold.

All across the Web, media are keeping an updated count of the dead in Yushu. It was 300 in the hours after the earthquake, it is now up to 617. According to Sun Shihong, a research fellow with the China Earthquake Networks, the death toll will rise even higher. The earthquake ocurred at 7:49am when many people were still in bed, which means relief workers will be uncovering bodies days and even weeks from now. Yushu is much more isolated then Wenchuan and there are no massive cities nearby, like Mianyang or Dujiiangyan, but the seat of Yushu Prefecture, Gyegu, lies only 50km from the epicenter and has a population of 100,000.

I remember in the days after the 2008 quake, I went to QingCheng Mountain near Dujiangyan and a local showed me a valley that had been made flat by landslides. He told me that there were several thousand people buried under all that rubble and he doubted that they would ever be dug out. In Hanwang, just a couple hours south of the epicenter of Wenchuan, soldiers with bulldozers wore masks weeks after the quake and the streets smelled of the dead. We will have to wait for the dust to settle to find out how extensive the damage in Qinghai really is.

All tragic events will bring the media storm. I remember sitting in the Bookworm in Chengdu and being amazed at the dozens of reporters and photographers with their crews milling about, flashing a dozen different badges from media outlets that I read daily. Many of them made the arduous hike to Beichuan and came back with photographs of the dead, the wounded, the bereaved, the hopeless, the hopeful. A hundred different stories vied for the front page and a thousand more were never told: I came across Daoist monks that had lost everything, villagers banding together to salvage what they could, construction teams from Anhui building temporary housing and young students with bandaged heads, without shoes, running and playing in the aftermath of Sichuan’s greatest tragedy.

In the 24 hours since the quake, every major newspaper and magazine has run a story about the quake, be it a cynical appraisal of China’s coping abilities, an optimistic account or just a list of ways to help. I expect that, just as with the last disaster, as soon as the first week has passed, the media will leave and the survivors and their friends and families will be left to carry on the work of re-construction.

In this current media storm, issues that were suppressed in 2008 are jumping to the fore of the discussion. Soldiers are telling reporters that their “top priority is to save students” and both domestic and international media has focused on the possibilities of tofu engineering and poorly built schools. Chinese media made shocked the world with their candid coverage in 2008 and this time is no different, as Chinese reporters ask the tough questions and seek out the right answers.

In the first days after the 2008 earthquake, thousands and thousands of people from all walks of life jammed the roads up north from Chengdu, choked up the international airport and streamed on foot into the hills to do what they could. Sichuan Quake Relief was formed literally hours after the earthquake and immediately began accepting water, food, clothes and medicine from the local expat community and trucking it up north. Every day for weeks, SQR shipped goods up to the affected regions. They also organized trips to schools, tent communities, fundraisers and anything else they could do to help out — they have also sent aid to the Yushu region. However admirable their efforts are, they pale in comparison to the local response. Estimates for the number of volunteers that came to Sichuan to help out range from tens of thousands to hundreds of thousands — one saw them in the unlikeliest of places, in groups of ten or twenty, many of them in their early twenties.

Beijing sent their Vice-Premier Hui Liangyu to the scene to show their support, which is less than the personal visits from both

Wen and Hu, but the scale of the damage will also be less than in 2008. Already the China Daily is touting the government’s swift and efficient response to the disaster and we can expect more of the same as the days go by. Some might say it is mere propaganda, but in truth, China saw what is possible two years ago when the country’s people mobilize so reports of thousands of relief workers climbing into the mountains of the Tibetan Plateau in freezing weather to dig out their Tibetan comrades are most likely spot on.

The epicenter of the Qinghai earthquake lies along the same fault line as the previous earthquakes, the Sichuan Quake and the smaller earthquake near Golmud in Qinghai Province last August. The line forms the boundary between the Tibetan and Chinese plates, so to say, and also their cultures and societies. Yushu is overwhelmingly Tibetan — around 96% according to most estimates — and also overwhelmingly poor. Poverty in Tibetan regions does not always equate with misery, but in a disaster like this the wealth of the area determines the amount of death and damage as well as the ability to recover and in some ways also the magnitude of the response.

The Wenchuan earthquake was closer to Han dominated areas of Sichuan than the Qinghai earthquake, but the affected areas in northern Sichuan are mostly inhabited by poor Tibetans living what most middle-class Americans would consider primitive lives. Running water might be an issue and heat is provided by yak dung or wood. Buildings are sometimes made of stone and wood and sometimes of mud and straw. Qinghai is a very underdeveloped part of China and this earthquake might do for southern Qinghai what it did for northern Yunnan after the Lijiang quake and what it is doing for northern Sichuan after the Wenchuan Quake: spur the authorities into building the infrastructure needed to modernize the lives of the locals. The whole Longmen Mountain range part of a volatile collection of faults that stretches along the Himalayas — all the way from Kunming to Xining — and is home to some of China’s wildest peaks, most pristine valleys, most backward and poverty stricken counties, bumpiest roads and largest concentration of minority peoples. 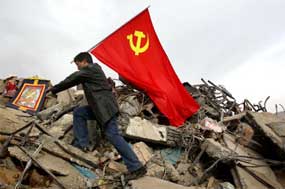 Highways from Kunming to Shanghai travel along this mountain range and more highways are being built through the heart of northern Sichuan west into Qinghai and Gansu, north into Shanxi Province and east all the way to Shanghai and Beijing, These projects are meant to lift the area out of poverty and now with another earthquake showing China and the world just how poor some of these places are, the pressure is on the local and national authorities to rise to the challenge once again and make an opportunity out of a calamity.

Were you in Chengdu when the earthquake struck? Have you ever experiences a natural disaster? Let us know. Next week, Chengdu Living will take a look at the work Sichuan Quake Relief has done in the past two years helping the people of northern Sichuan and we will also keep you updated on the Qinghai Earthquake.